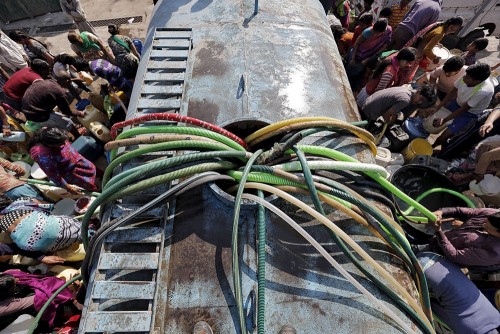 More than 10 million people in the capital of India are without water.

More than 10 million people without water in New Delhi. The Official said that, After the protests the army took the control of the key water sources, but still it will take 3-4 days for water to resume to normal supply.

Jats are demanding to be declared OBC (other backward class), which will help them secure the 27 per cent OBC reservation in government jobs. On last Friday, they took over the Munak canal,which was the main water source of the  city.

The Jat quota agitation has crippled Haryana for the second time in less than a year. The latest protest, however, has been more violent. This quota issue goes back to the 1990s.

Sixteen people have been killed and hundreds were wounded in last three days of rioting. The city schools were also closed after the water supplies from the channel were sabotaged during the protests. Monday morning Army took over the control of the Munak canal, but repairs are expected to take time.

Who are Jats?
The Jats community owns the land is relatively well and has traditionally been seen as higher caste.
They are based mainly in Haryana and seven other northern states of India.
Comprising 27% of voters in Haryana and overlook a third of the 90 seats in the state assembly, who are a politically influential community. Seven of the top 10 in Haryana ministers were Jats.
The Jats currently included as higher caste, but protesters have demanded the inclusion of caste quotas for employment and educational opportunities that have been available for the lower castes since 1991.
In March 2014, the national government led by the Congress said it would be reclassified as Jats Other Backward Castes (OBC), paving the way for government employment quotas.
However, the Supreme Court of India ruled in 2015 that the Jats were not a community back.
As jobs have dried up in farm incomes and privately have declined, the community has demanded the restoration of their caste status back so they can get government jobs.