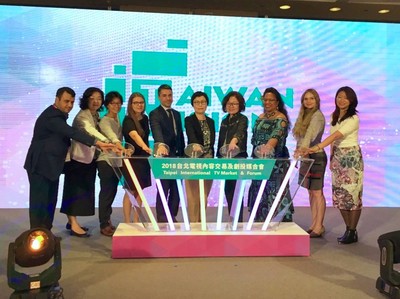 2018 Taipei International TV Market & Forum opens: A new ecosystem for the TV content industry and a blossoming of cross-sectoral innovation

In
remarks, Deputy Minister, Ting, stated that audiovisual content is a critical
indicator of a nation's cultural brand. Over the last two years, the Ministry
of Culture has shifted from authoritative role to a supportive partner. In doing
so, it has forged more links to the pop music, publishing, ACG, and cultural
assets sectors, which in turn has led to a renaissance in Taiwan's cultural
content. In remarks, foreign representatives posted to Taiwan were looking
forward to greater cooperation with Taiwan on film and television projects.
Taiwan is a rich, varied historical and cultural landscape whose stories are
ripe for developing into audiovisual products. From historical, cultural and
technical perspectives, Taiwan is therefore an ideal partner for audiovisual
projects. The foreign representatives were happy to work together to build up Taiwan's
audiovisual brand.

Buyers
from 24 countries would be on hand this year, including long-time buyers of
Taiwan's content such as Japan, South Korea, Hong Kong, and Southeast Asian
nations, and also those newly interested in Taiwan's content such as European,
South American, and West Asian nations. Buyers from Iran, Norway, and Spain attend
this event for the first time. The number of attendees from Southeast Asia,
meanwhile, is up to 53 percent this year. With this trading platform, BAMID expected
to provide more exposure of Taiwan's TV content to international buyers,
resulting in more exchanging experiences and technologies.

BAMID also
stated that this year, rooms for Business Matching and Venture Capital would be
provided for participants to conduct business. TV Project Pitching is set for
the first time for the producers of Taiwan's TV content and IP adaptation to pitch
their ideas for new projects and to present projects already in progress. The
event will also connect creators with funding to boost the scale and scope of
production of Taiwan's TV content. This will result in more Taiwan-centric
content ready for global audiences. Separately, to spur greater innovation in
cross-sectoral cooperation, and to build bridges between content and
technology, the Technology Exhibition Area showcases cutting-edge broadcasting
technology. At the Filming Location Assistance Zone, local government
representatives are on hand to share what makes their area great for filming.
The Startup Proposal/Demonstration Area, meanwhile, brings the work of rising
talents before international buyers' eyes to help them connect to the global
market.

Aside from
business meetings, the International Forum, consisting of three sessions, will
be held over the course of the three-day event. The sessions, entitled "Winning
formats: Creating globally popular content"; "A global media strategy: tapping
global markets through program rights, transnational co-productions, and IPTV";
and "Inside capital markets for audiovisual products," will see experts from
Taiwan and abroad to discuss relevant cases, operating experiences, and the
latest industry trends to stir up innovative thinking and vitalize TV culture's
economic returns.

During the
opening ceremony, Deputy Minister of Culture, Ting, presented the Awards for
2018 Rewarding Domestically Produced Television Dramas for Overseas
Broadcasting. The Best Effective Reach on Overseas Platforms Award went to
Sanlih E-Television Co., Ltd. for Bromance,
while the Best Overseas Promotion Award was given to Eastern Broadcasting Co.,
Ltd. for Attention, Love!. Clips from
these winning series were played for international buyers, in hopes of stirring
up greater interest in all the works exhibited this year.

The
Overseas TV Drama Broadcasting Awards have been presented since 2015. This
year's contest attracted five firms offering five contending works. After a
rigorous review process, the evaluating committee recommended Sanlih's Bromance for its having been marketed to
Japan, South Korea, the United States, Hong Kong, Macau, Singapore, Malaysia,
and Thailand. Using a variety of strategies, the series creators successfully
penetrated the above markets. Attention,
Love! was selected by the Annual Soompi Award for Best Foreign Drama. The
series has also been entered into exhibitions in Singapore, Seoul, and Japan. In
Japan, the series' leading actor and actress were interviewed by local media
and welcomed by fans. Such exposure helped to expand the reach of these series
into foreign markets, and for this accomplishment the review committee granted each
series NT$1 million as prize.

BAMID also
stated that since Minister of Culture, Cheng Li-chiun, took up her post, she
has devoted efforts to building up foreign audiences for Taiwan's programming.
The Overseas TV Drama Broadcasting Awards continue to be held to encourage
the creation of high-quality, marketable programming and to expand the nation's
cultural power. This year, the broad standard for these awards was overseas
exposure and broadcasting. Awardees were those who used effective marketing
strategies to best reach these goals.

Among the
criteria this year were the type and effectiveness of overseas broadcasting by
various channels/platforms, and the perceived difficulty of penetrating markets
entered, the use of a variety of marketing strategies, how proactively a series
was entered into foreign film festivals, and the effectiveness of foreign
promotions. Bromance and Attention, Love! came out ahead of the
pack and took home these prestigious awards.