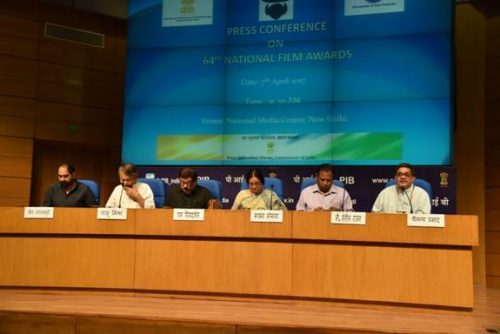 Akshay Kumar to be given Best Actor award for the film Rustom;

The 64th National Film Awards 2016 were announced today by the Chairpersons of the juries on Feature Films, Non Feature Films, Best Writing on Cinema and Most Film Friendly State Award. The Feature Film Central panel was headed by Shri Priyadarshan, an eminent Film filmmaker popularly known for his Malayalam movie Kanchivaram. The Chairperson for Non – Feature Film Jury was Shri Raju Mishra while the Chairperson for Writing Jury was Ms. Bhawana Somaaya. The Most Film Friendly State award which was introduced as a new category was announced by Shri Radha Krishna Jagarlamudi, a popular Director in Telugu film industry. The National Film Awards would be presented by Hon’ble President of India on May 3rd, 2017.

Prior to the announcement of awards, the Jury Members of the 64th National Film Awards for Best Writing on Cinema submitted its report to the Minister of State for Information & Broadcasting, Col. Rathore today. The Jury Members for the Feature and Non- Feature categories submitted the reports yesterday to the Minister for Information & Broadcasting Shri Venkaiah Naidu.

Some of the prominent winners in various categories for this year National Film Awards included Kasaav in Best Feature Film category and Fireflies in the Abyss in the Non-Feature Film Category. Ms. Sonam Kapoor was awarded Special Mention Award in the Feature Films Category for her role in the movie Neerja. Movies in the languages other than those specified in the VIII Schedule of the constitution in the feature Film categories were also awarded. The award for the best Moran Film was given to Haanduk while best Tulu film was given to Madipu.

Best Film Critic award was given to G. Dhananjayan for his in depth analysis on a wide range of topics such as film genres, brands, new strategies in movie watching, taxation impact and ticket pricing. Special Mention Award was given to the K.P. Jayashankar and Anjali Monteiro for the book ‘A fly in the Curry’. Best Book on Cinema award was given to ‘Lata- Sur Gatha’ authored by Yatindra Mishra.

Special Jury Award in the Feature category was given to Mohanlal for his mastery in dealing with characters of various shades with unparallel acting brilliance.
Special Jury Award in the Non-Feature category was given to ‘The Cinema Travellers’. This year a new category ‘Best on-location Sound Recordist’ in the Non-Feature Film section of the National Film Awards was also introduced.

The state of Uttar Pradesh was awarded the Most Film Friendly State award for implementing a unique film policy. The State’s Film Policy included various measures to create a suitable environment, which not only invited shooting of films on a large scale in the State but also promoted other activities related to various aspects of film production including financial incentives for filmmakers.

The state of Jharkhand was given Special Mention Award for their Film Policy which provided growth opportunities to the local filmmaking talent from within the State.