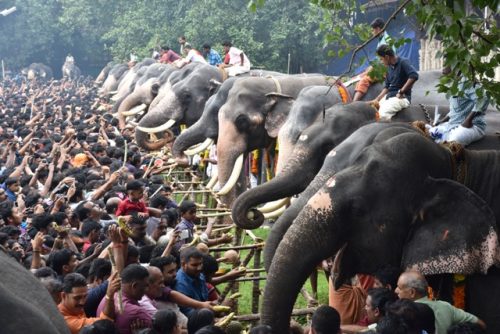 The Aanayoottu (feeding of elephants) is a festival held in the precincts of the Vadakkunnathan temple in City of Thrissur, in Kerala.

The festival falls on the first day of the month of Karkkidakam (timed against the Malayalam calendar), which coincides with the month of July.

It involves a number of unadorned elephants being positioned amid a multitude of people for being worshipped and fed.
A large number of people throng the temple to feed the elephants.

The special feed for the elephants is basically made of sugarcane, rice, ghee, coconut, jaggery and Ayurvedic medicines. This is prepared as per Ayurvedic principles, for enhancing the well-being of the domesticated elephants.

Every year of Aanayoottu, gaja pooja, is conducted. It is believed that offering poojas and delicious feed to the elephants is a way to satisfy Lord Ganesha—the god of wealth and of the fulfillment of wishes.

The Vadakkunnathan temple, which is considered to be one of the oldest Shiva temples in southern India, has hosted the Aanayottoo event for the past few years.