BEIJING, CHINA - Media
OutReach - 12 August
2020 - The anime
"A Whisker Away", also known as "Wanting to Cry, I Pretend to Be a Cat", was
premiered on June 18, 2020, and streamed in China through Xigua Video, Douyin
and Toutiao. It is another Xigua Video simultaneous global streaming with
Netflix after the BBC Series Dracula. It is reported that the film is available
to paying subscribers on the above platforms. 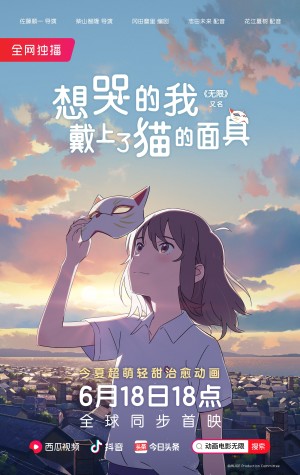 "A Whisker Away" is co-directed by famous
Japanese directors Junichi Sato and Tomotaka Shibayama. It is a fantasy of the
young girl Miyo Sasaki nicknamed "Muge". She finds a mask that would
turn her into a cat. As a cat, she becomes the intimate friend of the boy she
secretly loves, but she cannot turn back into a human being. So the boy embarks
on an adventure to help Muge turn back into a human being.

The film was formerly scheduled to premiere
theatrically in Japan on June 5, 2020，but was cancelled due to COVID-19. Finally, it
was simultaneous premiered online on Xigua Video and Netflix instead.

According to a responsible person of Xigua
Video, as a platform available with a wealth of animation content, Xigua Video
previously introduced such works as "Fireworks", "A Silent Voice" and "Tokyo
Godfathers".  He added, Xigua Video will
continue to provide users with more diversified, better and longer video
content. In addition to animated films, the platform has been bringing in other
genres successively.

"Dracula" was produced by Hartswood Films,
co-presented by BBC One and Netflix and distributed globally by BBC Studios.
The production team came from the original crew who gave us "Sherlock", the
acclaimed English series, including screenwriters Mark Gatiss and Steven Moffat
and producer Sue Vertue.

Phil Hardman, the senior vice president of
commercial strategy for BBC Studios Asia said, "We are honored to bring
this latest British masterpiece to the Chinese audience through Xigua Video. 'Dracula'
gathers together the best actors and top creative teams in the industry. While
striving to enrich the character image, they also refine the storyline and
production, hoping to bring refreshing feelings to the audience. China's online
video industry is developing rapidly. Its pace and scale have shocked the
world. Through partnerships with Xigua Video, we hope to reach a wider audience
and explore new cooperation models."

In addition, Xigua Video has entered in-depth
partnerships with many well-known documentary manufacturers, such as BBC
Studios and Discovery, in the forms of co-production, content production and
copyright cooperation. "Primates", a natural science documentary, was
exclusively available on Xigua Video and Toutiao on July 31. It is reported
that this is another high-quality popular science content co-produced by Xigua
Video and BBC Studios after "Hubble: The Wonders of Space Revealed".

Xigua Video is one of China's most popular
video-sharing platforms that enable users to discover, enjoy and share a wide
range of video stories, both short-form and long-form.