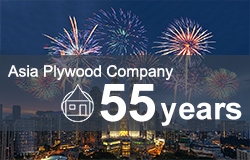 Sungai Petani, Malaysia, January 21, 2019 --(PR.com)-- Asia Plywood Company Sdn. Bhd., founded in 1964, is one of the longest running mills in West Malaysia and leading manufacturer of Malaysian Plywood. It celebrates its 55th year in plywood manufacturing. The company started out as a small sawmill in the mid-60's, supplying the local markets for the next thirty-years until 1995, when it was purchased by Tan Boon Huat, formerly part of the leadership team at the mill, prior to the acquisition. Under his direction, the mill improved the quality of its manufacturing to the standard required for international export, vastly increasing its exported volume. The 90's-fueled expansion in Europe, primarily in the UK, helped to drive the volumes necessary for the company to expand its factory footprint and relocate to Sungai Petani, Kedah. It also opened up a second mill along the Rajang River in Sarawak, a few short years later.

As plywood exports continued to surge, in 2006, the company began planning and building a new, and significantly larger factory, moving from its location along Jalan Badlishah to its current location in Bukit Selembau. In fact, the designed-from-the-ground-up mill was the largest of its kind in Peninsular Malaysia, a feat that it still maintains over a decade later. The new mill was master-planned to increase output by 100%, while reducing its carbon footprint with improved timber recovery, more efficient manufacturing process, and newer machinery.

Around this time, it appointed Arthur Iinuma as the Global Sales Director, formerly an Executive Director at Asia Green Group, Asia Plywood's parent company, and largely responsible for the rapid expansion of its property development portfolio. Under the direction of Mr. Iinuma, Asia Plywood expanded to the U.S., Canada, Australia, S. Korea, South Africa, New Zealand, Mauritius, and French Polynesia, broadly diversifying its coverage areas, and adding to markets such as the UK, Europe, China and Malaysia.

Today, their mill produces some of the highest quality tropical hardwood plywoods our of Malaysia, and carries a broad and diverse array of hardwood and softwood plywood products, ranging from commercial plywoods that are CARB Phase 2 certified, to Marine-certified BS1088. The company has supplied plywood for large commercial buildouts such as Point 92 in Damansara Perdana, RV manufacturers in the U.S., and performance yachtbuilders in the UK. Asia Plywood Company employs a workforce of 1,600 across two mills, and produce up to 25,000 cubic meters of plywood per month.