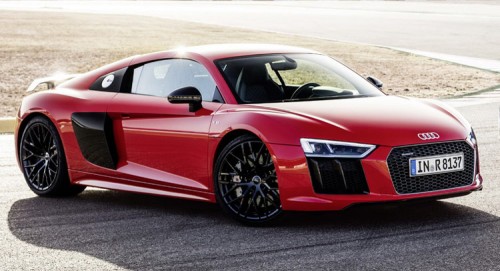 This is the first display of the second generation R8 V10 Plus in India, following its public reveal at the auto show in Geneva 2015. Following the same basic design as its predecessor, the all-aluminum car two-seater sports gets a new single frame grille and LED headlights.

Moreover, the car features cylinder-on-demand technology which automatically shuts down five of the 10 cylinders, thereby improving fuel efficiency. Audi claims the new model is 50kg lighter and 40 percent stiffer than the one it replaces, and claims to share around 50 percent of its parts with the racing-spec R8 LMS.

Other features include a fully customizable digital display and a multifunction steering wheel with nearly 20 controls that allow the driver to control various functions, including the starter motor and exhaust.

This year, Audi also has on showcase the all-new A4 for the first time in the country. Larger and lighter than before, the A4 resembles its predecessor, but is based on a new platform and incorporates updated technology and powertrains.

The carmaker’s display line-up also includes the A8 L Security – the armoured version of Audi’s flagship luxury limousine – and the Prologue concept.

The A8 L Security provides VR9 levels of ballistic protection to its occupants.

The Prologue concept seen in the Audi Pavilion provides an overview of the company’s future design language and the company’s design technology. The model is considered the precursor to design new generation of large sedans like the A6, A7 and A8. The car should be a preview of the new super-luxury limousine that will crown A9 future sedan line-up of the company, as well.