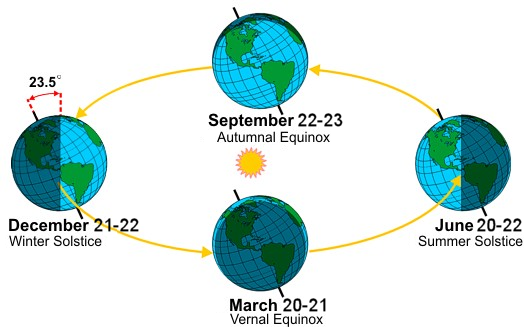 Today is Autumnal Equinox. An equinox is an astronomical event in which the plane of Earth's equator passes through the center of the Sun,which occurs twice each year, around 20 March and 23 September.

On an equinox, day and night are of approximately equal duration over the earth's equator. They are not exactly equal, however, due to the angular size of the sun and atmospheric refraction. To avoid this ambiguity, the word equilux is sometimes used to mean a day in which the durations of light and darkness are equal.

The equinoxes are the only times when the solar terminator (the "edge" between night and day) is perpendicular to the equator. As a result, the northern and southern hemispheres are equally illuminated. The word comes from Latin equi or "equal" and nox meaning "night".

The equinoxes, along with solstices, are directly related to the seasons of the year. In the northern hemisphere, the vernal equinox (March) conventionally marks the beginning of spring in most cultures[citation needed] and is considered the New Year in the Persian calendar or Iranian calendars as Nouroz (means new day), while the autumnal equinox (September) marks the beginning of autumn. In the southern hemisphere, the vernal equinox occurs in September and the autumnal equinox in March.