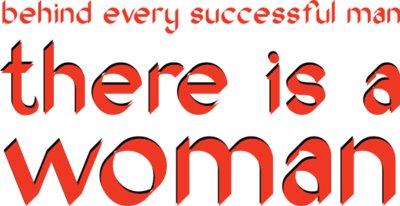 During a company's annual family trip to a crocodile farm in Thailand... the eccentric Boss dared any of his employees to jump into the crocodiles infested pond... and swim to the shore.

Anyone who survived the swim will be rewarded with 5 million... but if killed by the crocs...2 million will be given to the next of kin.

For a long period of time no one dared take up the challenge... then suddenly a man jumped in...and swam frantically for his life towards shore pursued by the crocs...and luckily he made it unscathed.

When he managed to recover his breath... the man, who became instant millionaire, shouted asking who pushed him into the pond..... it was his wife who did it.!!!

And from that day...that was how the phrase... "Behind every successful man...there's a woman"...came about !!