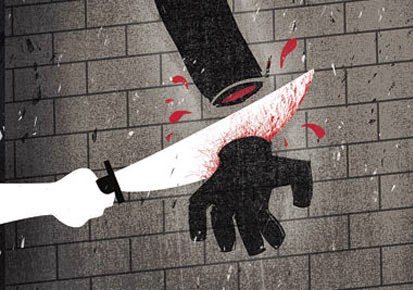 Yes, you heard it right, if you raise your Hands or Fingers against PM Modi, then BJP will chop it off. If you want your hands and don't want to get it chopped then better don't raise it against PM Modi. This statement was by Rai, the Lok Sabha member representing Ujiarpur while addressing a meeting.

This is a word by BJP chief, So take it seriously. BJP is a party who keeps their word, they are not like other Indian Parties. If they say, then they will do it, there is no doubt about it. There are many examples to prove this, before the election they had promised to bring back all the back money and you know that all the black money is back in our accounts. I forgot it, was it one lac or 5 lacs? Sorry I really forgot it.

Nityanand Rai, President of BJP’s Bihar wing has come up with a threat against Indian who is aganist PM Narendra Modi. Speaking at a function today, the BJP leader warned that those fingers and hands that are raised against the PM will be broken or chopped off.

The statement, which was made in the presence of many prominent leaders, including Bihar's Deputy CM Sushil Kumar Modi, immediately raised eyebrows. While Rai later said that he's taking back his statement which he used only as an idiom rather than an actual threat.

This is what actually he said: “..Unki or uthne waali ungali ko, uthne waale haath ko…hum sub milke…ya to tod dein, zaroorat pari to kaat dein. (Any finger or hand raised against the PM, we should get together to either broken or, if need be, chop it off.”