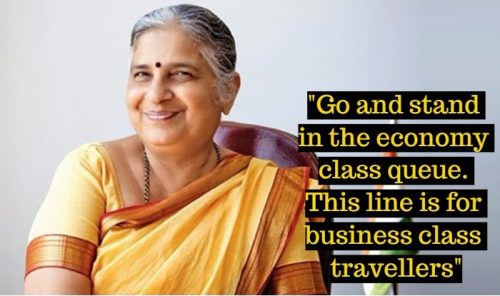 When chairman of Infosys foundation sudha Murthy was called "cattle class"
Here's an excerpt from Sudha Murty's 'Three Thousand Stitches: Ordinary People, Extraordinary Lives'
Last year, I was at the Heathrow International Airport in London about to board a flight. Usually, I wear a sari even when I am abroad, but I prefer wearing a salwar kameez while travelling. So there I was—a senior citizen dressed in typical Indian apparel at the terminal gate.Since the boarding hadn’t started, I sat down and began to observe my surroundings. The flight was bound for Bengaluru and so I could hear people around me chatting in Kannada. I saw many old married couples of my age—they were most likely coming back from the US or UK after helping their children either through childbirth or a new home. I saw some British business executives talking to each other about India’s progress. Some teenagers were busy with the gadgets in their hands while the younger children were crying or running about the gate.

After a few minutes, the boarding announcement was made and I joined the queue. The woman in front of me was a well-groomed lady in an Indo-Western silk outfit, a Gucci handbag and high heels. Every single strand of her hair was in place and a friend stood next to her in an expensive silk sari, pearl necklace, matching earrings and delicate diamond bangles.I looked at the vending machine nearby and wondered if I should leave the queue to get some water.

Suddenly, the woman in front of me turned sideways and looked at me with what seemed like pity in her eyes. Extending her hand, she asked, ‘May I see your boarding pass, please?’ I was about to hand over my pass to her, but since she didn’t seem like an airline employee, I asked, ‘Why?’
‘Well, this line is meant for business class travellers only,’ she said confidently and pointed her finger towards the economy class queue. ‘You should go and stand there,’ she said.

‘Really?’ I decided to be mischievous and pretended not to know.
‘What kind of privileges are you talking about?’

She seemed annoyed. ‘We are allowed to bring two bags but you can only take one. We can board the flight from another, less-crowded queue. We are given better meals and seats. We can extend the seats and lie down flat on them. We always have television screens and there are four washrooms for a small number of passengers.’
Her friend added, ‘A priority check-in facility is available for our bags, which means they will come first upon arrival and we get more frequent flyer miles for the same flight.’

‘Now that you know the difference, you can go to the economy line,’ insisted the woman.
‘But I don’t want to go there.’ I was firm.
The lady turned to her friend. ‘It is hard to argue with these cattle-class people. Let the staff come and instruct her where to go. She isn’t going to listen to us.’
I didn’t get angry. The word ‘cattle class’ was like a blast from the past and reminded me of another incident.One day, I had gone to an upscale dinner party in my home city of Bengaluru. Plenty of local celebrities and socialites were in attendance. I was speaking to some guests in Kannada, when a man came to me and said very slowly and clearly in English, ‘May I introduce myself ? I am . . .’
It was obvious that he thought that I might have a problem understanding the language.
I smiled. ‘You can speak to me in English.’
‘Oh,’ he said, slightly flabbergasted. ‘I’m sorry. I thought you weren’t comfortable with English because I heard you speaking in Kannada.’
‘There’s nothing shameful in knowing one’s native language. It is, in fact, my right and my privilege. I only speak in English when somebody can’t understand Kannada.’

The line in front of me at the airport began moving forward and I came out of my reverie. The two women ahead were whispering among themselves, ‘Now she will be sent to the other line. It is so long now! We tried to tell her but she refused to listen to us.’

‘Yes,’ I replied.She smiled and moved on to the next traveller.
I walked a few steps ahead of the women intending to let this go, but then I changed my mind and came back.
‘Please tell me—what made you think that I couldn’t afford a business class ticket? Even if I didn’t have one, was it really your prerogative to tell me where I should stand? Did I ask you for help?’
The women stared at me in silence.

‘You refer to the term “cattle class”. Class does not mean possession of a huge amount of money,’ I continued, unable to stop myself from giving them a piece of my mind.

‘There are plenty of wrong ways to earn money in this world. You may be rich enough to buy comfort and luxuries, but the same money doesn’t define class or give you the ability to purchase it. Mother Teresa was a classy woman. So is Manjul Bhargava, a great mathematician of Indian origin. The concept that you automatically gain class by acquiring money is an outdated thought process.’
I left without waiting for a reply.