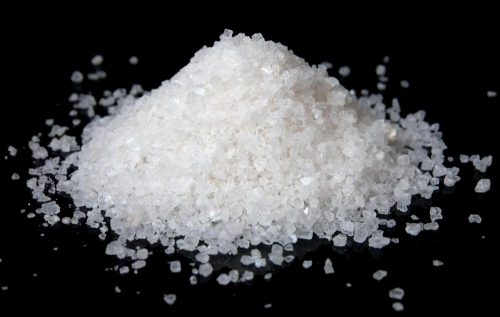 Chemically it is called as sodium chloride or NaCl2..

When we were young, this salt was produced by evaporating sea water. That was the only source of getting salt and it was abundantly available. It was so cheap that even the grocery traders in Mumbai used to keep it unlocked outside their shop during night time.

The corporate lobbying worked. Rajiv Gandhi government BANNED human consumption of natural sea salt and made it mandatory to use iodized salt all throughout india.

The ladies liked this salt because it was not getting sticky during monsoon like sea salt. A small quantity was sufficient to create taste etc. But price of Tata salt was almost 5 times the sea salt.

Nobody knows the real story why Tata's lobbied to ban natural sea salt.

Tata chemicals had a huge chemical plant in Mithapur, Gujarat state. They used to produce tons of chemically induced salt as a byproduct in the chemical process.

This salt cannot be dumped in the landfill otherwise it would destroy farming land. Hence Tata chemicals had created railroad tracks to take this salt to the sea and dump it in the sea.

Naturally, they were spending huge money in disposing this salt. Hence they followed the western ideology of creating iodized salt.

When indian government changed the rules, Tata chemicals started making huge profit instead of spending money in disposing the salt.

1) The sodium content in chemically induced salt is very high. That is why even a small quantity was sufficient to create taste. Prolonged consumption of This salt created high blood pressure, stroke and heart attack problems.

3) Iodine level in the human body is a very delicate balance. If it is not within the limits then it creates thyroid problem. Generally speaking, Indians have a balanced iodine level and don't need extra dose of iodine.
But with Tata salt, everyone was getting unnecessary extra dose of iodine. Result, people started getting thyroid problem, obesity problem and other issues.

All this because of pinch of salt that was controlled by the government regulation.

In US, people realized heath issues due to this salt and asked to lift ban in the sea salt.

But now the sea salt is available in US as a novelty with a premium price. It is dlmost 5 times costlier than the chemically manufactured iodized sea salt.

The point is, the sea salt which was cheap and abundantly available through natural sources, was banned by the government and after couple of decades, same sea salt is now available 5 times costlier!!!!

This is called corporate strategy and good governance.

Yes time and time again good doctors have recommended going back to natural salt.
Thank you for exposing the grand conspiracy of corporates. Lets all go back to sea salt.