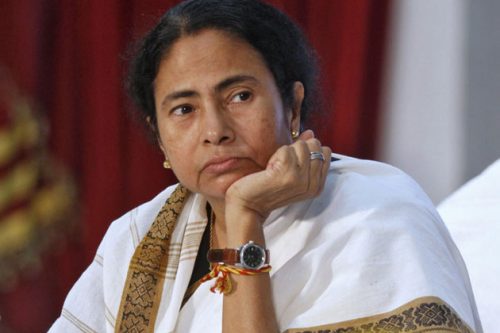 3/4th of her voters in West Bengal are all illegal immigrants from Bangladesh, Bhutan, Nepal & Mayanmar who all got their voters ID through fake documents prepared by TMC workers.

The same illegal immigrants could not open Bank accounts as under KYC (know your customer) directive by RBI, these people could not furnish the documents required by the Banks as they did not have & could not obtain the required documents as their stay in India itself was/is illegal.

After Demonitisation the worst hit along with the Black money hoarders & tax evaders are the illegal immigrants.

It is these illegal immigrants(Mamata's vote bank) whom Mamata Banerjee wants to protect. It is a clear case of vested interest, which is as dangerous & as illegal as black Money hoarding & tax avoiding.

There is absolutely no reason for Mamata Banerjee to come to Delhi & protest which she could have done at Calcutta itself. This itself is a proof of her evil design.

Every Indian should condemn in whatever form they deem fit, the cunning & self interested motive of Mamata Banerjee.

Coming to the Congress whose spokemen on TV channels bluff that more than 100 people have died due to Demonitisation. They also go to misguide the people saying when they went to bank to draw money from their account they had to get the inedible ink marked on their fingers.

This again is an absolute bluff as the ink is marked only on the finger of persons who go to exchange the old Rs.500 & Rs.1000 notes over the counter & who do not have bank accounts. This again is a proof of congressmen misguiding the people.

It also shows they are the ones who are exchanging their undeclared & black money consisting of Rs.500 & Rs.1000 notes.

Honest & patriotic citizens of India: please, please, please do not allow the above type of people to derail the measures being taken by the present Government in trying to make India a great & thriving County.