BERLIN, GERMANY / CHANTHABURI, THAILAND - EQS - September 6, 2019 - In
connection with the publication of its quarterly figures, the Berlin jewelry
retailer elumeo SE, which operates through its subsidiary Juwelo TV, has issued
a statement on the situation of its former jewelry manufacturer and supplier
PWK Jewelry Company Limited (Thailand). This statement was met with great
astonishment by the managing directors and employees of the now insolvent
company. The jewelry manufacturer PWK became insolvent because elumeo SE had
ordered goods worth over 30 million euros through its subsidiary Silverline
Distribution Ltd. and paid only a small part of this amount. As a result, PWK
Jewelry Company Limited was unable to pay salaries, statutory severance
payments, creditors or loans. Over 600 employees lost their jobs and protested furiously
in Bangkok and Chanthaburi. 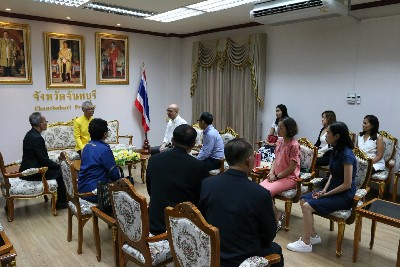 Workers of the jewelry manufacturer PWK Jewelry Company Limited and representatives of the Ministry of Labour met the governor of the Thai province Chanthaburi. More than 600 PWK workers became unemployed after the German jewelry retailer elumeo SE ordere

Wolfgang Boyé, chairman of the board of directors of the parent company
elumeo SE, falsely claimed to the newspaper "Handelsblatt" that the
PWK had sufficient funds at its disposal to pay off the workers and settle
debts.

Taralatp Vrasarinnop Representative of the PWK Managing Directors:
"elumeo's management is trying to cover its criminal actions with a
network of misrepresentations, changed information and simple lies. In a
desperate attempt to justify the destruction of a company and the lives of over
600 people, elumeo's management is spreading false claims and false facts.

Wolfgang Boye's assertion that he cares about the fate of former PWK
employees is nothing more than a cynical, inhuman assertion. As hundreds lots of
e-mails and messages prove, the last salaries were paid at the insistence and
under the constant pressure of the PWK board members. Elumeo SE has written to
PWK's directors urging them to find a way to force employees out of the company
without having to pay their statutory severance pay."

Wolfgang Boyé, under whose leadership the listed elumeo SE began a rapid
economic downturn, repeats in the newspaper "Handelsblatt" his
objectively false assertion that the PWK had sufficient funds to pay the
workers and creditors. Here are the facts:

1. The public prosecutor's office in Germany
(file number 242 540/19) is investigating, as well as the police authorities in
Thailand the management of elumeo SE (Wolfgang Boye, Bernd Fischer and Tomas
Jarmuske) for fraud, among other things. elumeo SE actively caused the economic
imbalance of PWK Jewelry Limited by not paying for deliveries by PWK Jewelry
Limited.

2. Elumeo SE is not paying its liabilities to PWK
Jewelry Limited, although elumeo SE and its subsidiary Juwelo Deutschland GmbH
have unpaid jewelry in stock worth several million Euro, which was demonstrably
supplied by PWK Jewelry Company Limited.

3. The managing directors of PWK Jewelry Limited
are personally liable in Thailand for the bank loans taken by PWK Jewelry
Limited because elumeo SE does not settle its liabilities to PKW Jewelry
Limited. In addition, they are also threatened with criminal consequences
(imprisonment) because of the unpaid salaries and severance payments of the
workers.

4. On 31 August 2018, elumeo SE through its
subsidiary Silverline Distribution Ltd. (Hong Kong) issued a written
instruction not to "sell, transfer or otherwise dispose of the Company's
assets". Thus, contrary to the assertion of Wolfgang Boyé and his CFO
Bernd Fischer, the PWK management could not sell any assets of PWK in order to
raise liquidity.

7. PWK Jewelry Limited can expect a VAT refund of
EUR 1.1 million in three to five years at the earliest. This is how long the
procedure at the Thai tax office will take, which is also known to elumeo SE.
That, too, could not be counted on.

8. The management of PWK Jewelry Limited has
repeatedly submitted, in writing, proposals for restructuring and cost
reduction in accordance with Thai law. All proposals were ignored by the
management of elumeo SE.

9. The managing directors of PWK were
deliberately used by the management of elumeo SE as personal guarantors for the
bank loans taken out by PWK Jewelry Limited in Thailand, with the clear
statement that no other subsidiary of elumeo or its management should provide
such guarantees, but only (quote) "individual guarantees from directors of
PWK. There is no further participation or exposure such as personal guarantees
or letters of comfort from any other company of the elumeo group or collateral
in any other assets of PWK (e.g. inventories, finished goods)".

All of the above facts are fully documented and are currently being
investigated by the Thai police and the German public prosecutor's office.