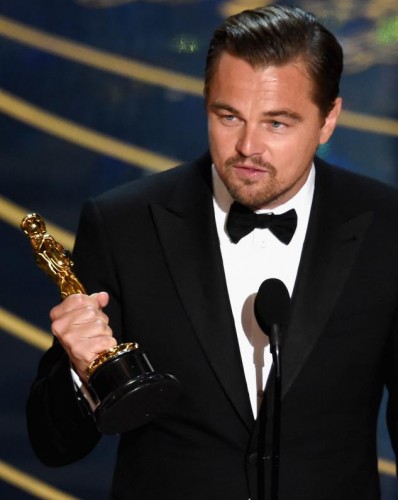 Leonardo DiCaprio has won the Academy Award for Best Actor for his work in The Revenant.

Born in 1974 without a statuette, Leonardo Willhelm DiCaprio has starred in over two dozen films, including Gangs of New York and The Basketball Diaries. He once had an uncredited role as Darlene's classmate in a 1991 episode of Roseanne. To date, DiCaprio has won over 40 awards and has been nominated six times for an Oscar. This is his first win.

The Revenant won three of the 12 awards for which it was nominated.

His win wasn't exactly unexpected. DiCaprio had won every major pre-Oscar award of the 2016 awards season, including the Golden Globe and the Screen Actors Guild award. But with DiCaprio, there's always the sense that someone might swoop in at the last moment and win instead.

"Climate change is real. It is happening right now. It is the most urgent threat facing our entire species, and we need to work together and stop procrastinating," he said in the most passionate moment of his speech.