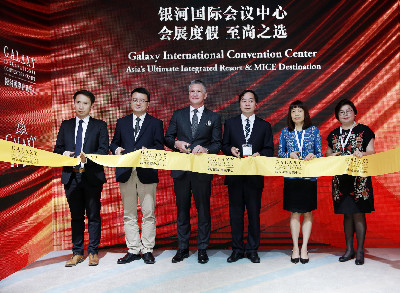 From left to right Mr. Ruan Wei, Deputy
Director-General of Trade and Investment Promotion Department of the China
Council for the Promotion of International Trade

Mr. Dong Hui, Director of the Committee for
Liaison with Hong Kong, Macao, Taiwan and Overseas Chinese of the CPPCC National
Committee

Ms. Leong Kit Chi, Director of the Office of
the Macao Special Administrative Region in Beijing

Ms. Elaine Wong, Senior Manager of
Promotional Activities and Development of Conventions and Exhibitions
Department of the Macao Trade and Investment Promotion Institute 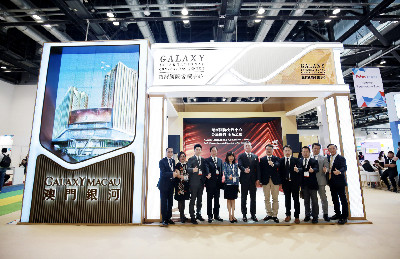 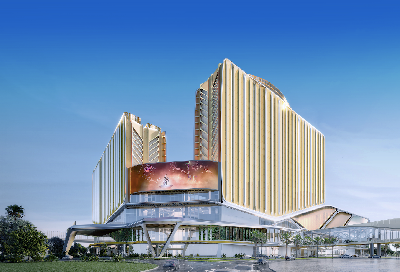 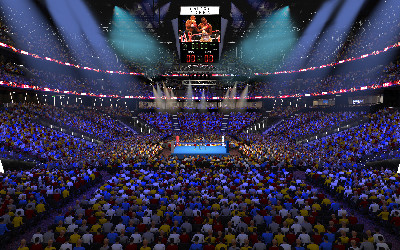 Galaxy
Arena - The Ultimate Integrated Entertainment Experience, one of Asia's largest
venues located in Macau, with a 16,000-seat capacity, where spectacular events
come to life.

Galaxy International Convention Center -- Exhibition & Convention Hall, 10,000m² pillar-less space to accommodate up to 7,000 delegates, which is fully flexible for events of any scale.

Galaxy International Convention Center, together with spectacular events venue Galaxy Arena, is set to establish Asia's most iconic and advanced integrated MICE
destination when it opens in Macau in the first half of 2021.

Dr. Lui Che Woo, GBM, MBE, JP, LLD,
DSSc, DBA, Chairman of Galaxy Entertainment Group, said,''We are honored to
introduce state of the art MICE and Arena facilities to attract new visitors
and complement the Macau Government's vision of deversifying the econmony and
developing Macau into a World Center of Tourism and Leisure."

Creatively designed
for bespoke meetings, incentives, conferences and exhibitions, this ultimate
integrated resort and MICE destination is the latest addition to Galaxy Entertainment
Group's ever-expanding integrated resort precinct in Macau, which will set a
new standard for Macau, while supporting the city's vision of becoming a 'World
Center of Tourism and Leisure'.

Macau as An Ideal
Destination

Macau is a
uniquely attractive destination for domestic and international MICE organizers.

The UNESCO World
Heritage Site with more than 20 historical locations has a rich cultural
heritage for visitors to explore; and is also a food lovers' paradise
designated as a UNESCO city of gastronomy.

Most
notable among vastly-improved transportation links is the newly-opened Hong Kong-Zhuhai-Macau Bridge. T he world's longest sea-crossing dramatically
enhances Macau's connectivity with the region's
Greater Bay Area .
'The age of the bridge' heralds a new era for placing Macau on the
world's MICE industry map.

Poised to open a new chapter for MICE tourism,
guests also enjoy easy access to 1.1 million m2 of unique
entertainment, shopping and leisure attractions. These include 120 dining
options at Galaxy Macau, some of which have been garnered such prestigious accolades
as the Michelin Stars, and Broadway Food Street at Broadway MacauTM which
is just a link bridge away from Galaxy Macau.

GICC introduces
many world class features including a 10,000m2
pillar-less Exhibition Hall for trade shows; an Auditorium seating 650 guests for keynote sessions, ceremonies, performances and
product launches; a Banquet Hall seating 2,400 guests; a 4,000m2 Conference Hall consisting of 3 partitionable spaces; a Ballroom catering for over 1,000 guests; a diverse selection of dining
options and a luxury lifestyle
hotel with over 700 rooms.

A talented EVENT STUDIO team of highly creative and
innovative event professionals collaborate with event planners to ensure their
vision is delivered with 'World Class, Asian Heart' service, from venue
selection, theme and décor to entertainment and visual and lighting
effects.