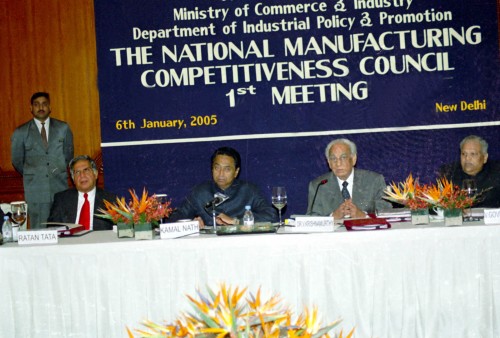 The Union Minister of Commerce and Industry Shri Kamal Nath addressing a meeting of the National Manufacturing Competitiveness Council (NMCC) in New Delhi on January 6, 2005.[/caption]The Cabinet Committee on Economic Affairs, chaired by the Prime Minister Shri Narendra Modi, has given its approval for winding up of National Manufacturing Competitiveness Council (NMCC) with immediate effect as the Council has fulfilled the mandate for which it was constituted.

The NMCC was established in 2004 as a part of the Common Minimum Programme (CMP) of erstwhile government to provide a continuing forum for policy dialogue to energize and sustain the growth of manufacturing industry. It was set up as an autonomous organization with its Chairman in the rank of a Cabinet Minister and members from Government and Industry. Dr. V. Krishnamurthy, the former Chairman of the Council resigned from the post on 28th May, 2014 and Shri Ajay Shankar, IAS (Retd.) demitted office as Member-Secretary of the Council upon expiry of his tenure on 22nd November, 2014. In the absence of a Chairman and no fresh constitution, the NMCC has become non-functional.