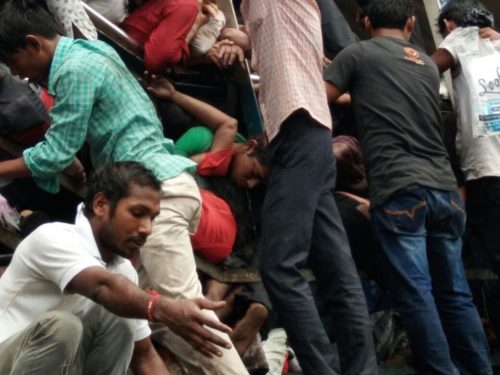 Today I was part of something terrible at Elphinstone railway station
1. At peak hours (10 am), people started blocking exits because it was raining and they wanted to be under the bridge to not get wet.

2. Soon, within a span of 15 minutes, almost 5 local trains from Dadar and Parel stopped. Atleast 500 people would hv got down.

3. With exits partially blocked, the railway bridge was packed !! All exits packed.

4. Panic started!
a. Shouting, sweaking, squealing started. Spreading the panic further.
b. Pushing/use of force began. Staircases are a tricky place to push
c. Nobody wanted to back out ! Inspite of crazy crowd..people still wanted to come on the bridge. Impossible to convince people to stop !

5. I saw a few people fainting because of suffocation.

6. Finally, i think a few stairs broke (or something happened) which led to atleast 50 people piling on top of each other ! Ladies, gents all alike ! Horrible sight ! I was 10 metres away from getting dragged in it.

7. People still wanted to go over people to get on the other side. Nobody wants to stop

8. Finally, volunteers emerged. People climbed on railings and started breaking the side walls (taalpatris) to let mk people come out from sides.

I dont know how much the damage is ! I managed to escape. 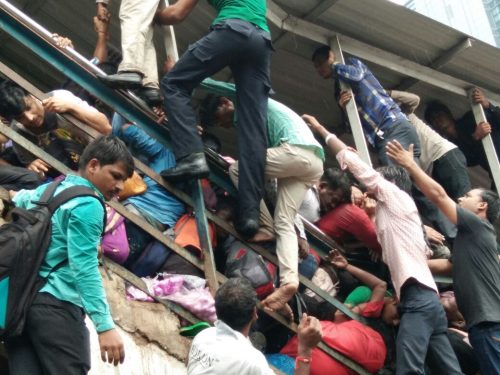 To ALL IDIOTs when in a crowd :

LEARN TO BEHAVE WHILE IN A CROWD. SOMEBODY MIGHT DIE BECAUSE OF YOU.!!