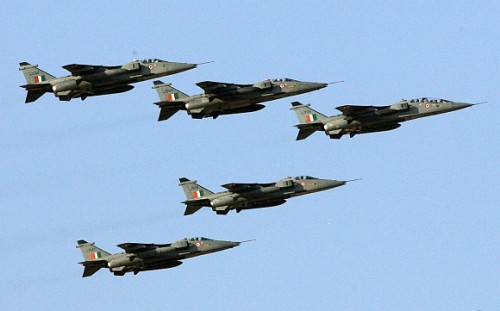 The Indian Air Force is demonstrating its combat and firepower on 18 Mar 16 at Rajasthan’s Pokhran firing range in the presence of the Hon’ble President Shri Pranab Mukherjee and the Hon’ble Prime Minister Shri Narendra Modi. During the event, the IAF would showcase its capability delivering fire power both by day as well as by night.

Air Chief Marshal Arup Raha, Chairman Chiefs of Staff Committee and Chief of the Air Staff would be welcoming the Hon’ble President and the Hon’ble PM at Pokhran. The primary objective of this exercise is to demonstrate the IAF’s capability to safeguard our national interests. During the exercise, the IAF would also project its transformational state-of-the-art combat potential for meeting challenges be it from the air, land or sea.

The event comprises six packages depicting six themes in which more than 180 fighters, transport aircraft and helicopters are participating.

First on the show, would be a flypast showing IAF’s journey over eight decades, with the aircraft of yesteryears like Tiger Moth flying along with the with the latest acquisitions of the IAF. The flypast by a mixed formation comprising MiG-21, MiG-27, MiG-29 and the mighty Su-30, would represent the transformation of the IAF over the decades.

Next package would comprise net-enabling operations aircraft. This would commence with fly past by the indigenously developed Airborne Early Warning and Control System aircraft, which would then be followed a synchronized weapon delivery demonstration comprising precision based bombing at simulated targets by Mirage-2000, Su-30, MiG-27 and the Jaguar.

After demonstrating offensive capabilities, the IAF would showcase its multi-layered Air Defence operations. It will comprise fly-past by Flight Refuelling aircraft, IL-78 FRA along with two Su-30 aircraft which will demonstrate the ability to extend on-station endurance and strategic reach of fighter aircraft. This phase would also include Surface to Air Guided Weapons like the IGLA shoulder-fired missile system and the OSA-AK missiles striking down airborne targets. Capability demonstration of the indigenously developed ‘Tejas’ aircraft to deliver Laser Guided Bomb and fire a Air-to-Air Missile and the capability of the indigenous Light Combat Helicopter to carry out rocket firing would be carried out for the first time. This would be followed by a spectacular simulation of a Combat Search and Rescue operation carried out by the IAF’s versatile helicopters such as MI-35 and Mi-17V5. The firing of Akash Missile would be undertaken for the first time in the IAF’s history of Fire Power Demonstration.

The next phase would highlight the important role played by the Indian Air Force in support of the ground forces. This phase involves striking of targets that would simulate the enemy’s vital assets which would be engaged from the air by a variety of aircraft in the IAF’s inventory. In addition, the assault landing capability of the versatile C-130J aircraft and the fire fighting capability of the Mi-17V5, would also be displayed.

After the demonstration of live weapons, an array of aerobatic displays by the Sarang Team, the Suryakiran Team and the Su-30 would add fervour to the evening. The Air Warrior Drill Team and Air Force Symphony Orchestra would then enthral the audience with their performances on Terra Firma.

As night draws down upon the desert skies, the night capabilities of the IAF would come to fore. A number of targets would be engaged in this phase by fighters, transport aircraft and helicopters using rockets as well as bombs. The Combat Free-Fall jumps during the night would showcase, how the IAF could take on insertion of troops deep into the enemy territory, undetected.

The entire event would showcase more than 22 types of platforms and Weapons systems. Frontline fighter aircraft including Sukhoi 30, Mirage 2000, Jaguar, MiG-29, Attack helicopters, Remotely Piloted Aircraft(RPA) and high tech AWACS would display their potential during the show. Light Combat Aircraft ‘Tejas’ and LCH the prestigious indigenous projects, would also be a part of air display. Transport aircraft like the An-32, Embraer, IL-76, IL-78 and C-130J would participate in all their glory while medium lift helicopters(Mi-17, Mi-17 1V. Mi-17V5) and attack helicopters(Mi-25, Mi-35) would also showcase their capabilities.