TAIPEI, TAIWAN - Media
OutReach - 31 July 2019 - iCHEF, Taiwan's restaurant POS system
leader, announced today a major update on its POS system which is integrated
with Facebook Rewards, bringing a new point collecting experience to restaurant
partners and consumers. Consumers can easily collect rewards by scanning the QR
Code on their receipt after checkout. With this new integration, restaurants
can maintain customer relationships more effectively. Also, stores can have a
better understanding of how their business is doing through checking iCHEF's
system, in creating more opportunities in F&B technology industry. 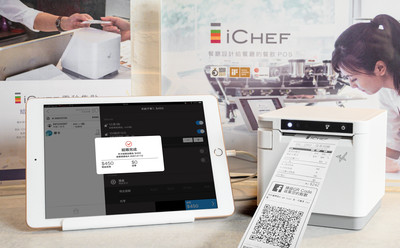 iCHEF announces a major update on its POS
system which is integrated with Facebook Rewards, enabling reward points
collection by scanning the QR Code on their receipt after checkout

Taiwan
has a world-class F&B industry filled with rich diversity and independent
stores as well as a "reward points collecting" culture, which is deeply
integrated to consumer daily life. With so many small-sized restaurants opened
in Taiwan and the industry is being highly competitive, restaurant owners
strive to create innovative experiences and are more willing to accept new
technologies. However, compared to chain restaurants, it is more difficult for
small-sized restaurants to build their own POS and reward collecting systems. Facebook has a high penetration rate in Taiwan, 19M people
access Facebook every month, allowing iCHEF to cooperate with Facebook and
create a Taiwan-born POS system which fully integrates Facebook Reward
system.  It is iCHEF's hope that the new
iCHEF POS system will become a great tool for restaurant owners while solving
the pain of "reward points collecting" through technology.

Ken
Chen, co-founder of iCHEF says, "As of today,
iCHEF has been installed in more than 5,500 restaurants in Taiwan; we find small
stores eager to manage membership in order to keep their customers. However,
paper-based point collection cards are often thrown away, while virtual
collection holds up the line. Working with Facebook to co-develop and integrate
Facebook Reward with iCHEF POS system, we hope to solve the problem with reward
points collecting for both restaurant owners and consumers. It is also our goal
to further complete the F&B technology ecosystem by allowing small-sized
restaurants to build on customer relationships and optimize operational
efficiency through technology."

iCHEF collaborates with Facebook in integrating Facebook
Rewards into the POS system. The iCHEF POS system will automatically generate
an exclusive QR Code on the receipt after checkout, while the only thing
customers have to do is to scan the QR code via Facebook App. This
significantly increases the efficiency in collecting reward points for both
restaurant owners and consumers to further help restaurant owners build and
maintain customer relationships.

For consumers, there is no longer a need to download new
apps while visiting new stores, carry a variety of loyalty cards at all times,
or offer their phone numbers at the checkout. As for restaurant owners, since
QR Codes are printed directly on receipts, new equipment are not needed for
reward points collection. At the same time, with QR Code being printed on the
receipts, collecting reward points is no longer limited to stores only. No
matter it is a take-away, an order-in, or an order completed by friends or
family, each point can be easily collected as long as you keep receipts. In
addition, restaurant owners are able to check on the status of reward points
from the back-end system. By making use of every data, it is more likely to
successfully manage customer relationship, with advantages in terms of data,
customer service, and marketing. Even small restaurant owners can enjoy high-class
F&B technology as F&B groups do.

As Facebook's
first certified POS partner, iCHEF was the first to integrate Facebook Rewards
into their POS systems in the marketco-develop the reward points collection system
with Facebook for small and medium-sized restaurants.

The first beta testing merchants for the rewards point
system include:  "Sian-su
Lee"  that sells salty crispy
chicken in a hipster way, "Dodoli"
with Korean tofu pot in the eastern district of Taipei, "Sweet
Rainbow" with fantastic shaved ice, the popular restaurant "Mushroom
Forest"  in Ximending, and "The
Little Spicy" with spicy pot. Since the new features were launched, nearly
150 restaurants and stores have applied for iCHEF POS. The new POS system
facilitates their experience with the new collection technology.

Shu-Hsian Lee -- the founder of Sian-su Lee, one of the
beta testing merchants -- states that, "Sian-su Lee was founded only by the
end of last year, and we strive to refine salty crispy chicken, a traditional
street food in Taiwan. We've been moving towards a young, modern, and branded
direction in the operation. Being the first partner of iCHEF POS and Facebook
Rewards, as well as experiencing the high-speed collection process are a great
honor. It is really convenient that we need only to hand receipts over, rather
than buy any additional point-collection devices or software. Hopefully in the
future, we can use the POS system to critically analyze data and effectively
engage with members!"

iCHEF delivers POS technology and service that helps small
and medium-sized restaurants to prevail in their own way. Instead of merely
serving as an order and cashier tool, iCHEF POS collects information and fully
makes good use of every transaction data. Believing the value of POS systems
can be redefined, iCHEF will make more extended applications and renovate
catering technology.