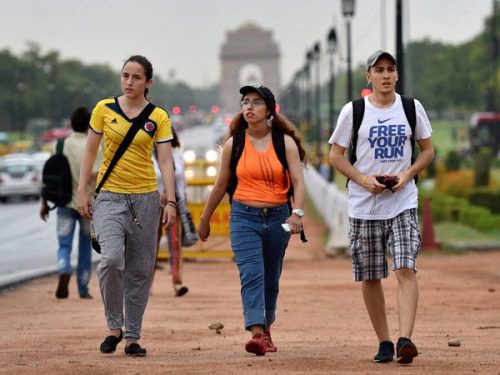 The number of Foreign Tourist Visits (FTVs) to different States/ Union Territories for the year 2013, 2014 and 2015 were 19.95 million, 22.33 million and 23.33 million, respectively. The top five States, in terms of number of FTVs during 2015 were Tamil Nadu, Maharashtra, Uttar Pradesh, Delhi and West Bengal.

The States/UTs, namely, Andaman & Nicobar Islands, Bihar, Chandigarh, Himachal Pradesh, Jammu & Kashmir and Uttarakhand witnessed decrease in FTVs during 2015 as compared to 2012. The status of Andhra Pradesh and Telengana has been treated together in view of non availability of break-up of data of FTVs for the year 2012.

Some of the factors responsible for Foreign Tourist Arrivals in any country, including India, are economic conditions of the source and destination countries, air connectivity, etc.

The initiatives taken by the Ministry of Tourism in the recent years for promoting tourism and to attract more tourists in the county are as below:-

a. Launch of the Swadesh Darshan and PRASAD (National Mission on Pilgrimage Rejuvenation and Spiritual Augmentation Drive) Schemes in the year 2014-15 with a vision to develop theme based tourist circuits to enrich tourist experience and beautify and improve the amenities and infrastructure at pilgrimage centres.

b. Introduction of e-Tourist Visa facility for the citizens of 150 countries at 16 airports.

c. Revision of e-TV fee in four slabs of 0, US$25, US$48 and US$60 from November 3, 2015. Earlier e-TV application fee was US$60 and bank charge as US$2 which was uniform for all the countries. The revision of Visa fee has been done on the principle of reciprocity. Bank charges have also been reduced from US$2 to 2.5 % of the e-TV fee.

d. The Ministry of Tourism has launched ‘Welcome Booklet’ with information on Do’s and Don’ts for tourists, contact details of India Tourism domestic offices and Tourist Helpline Number for distribution at immigration counters to tourists arriving at international airports.

The Ministry of Tourism has taken the following measures to ensure the safety and security of foreign tourists:-

i. The Ministry of Tourism has launched the Toll Free Multi-Lingual Tourist Helpline on 8.2.2016. The languages handled by the Tourist Helpline include ten International languages besides English and Hindi, namely, Arabic, French, German, Italian, Japanese, Korean, Chinese, Portuguese, Russian and Spanish. This service is available on the toll free number 1800111363 or on a short code 1363 and operational 24x7 in a year offering a “multi-lingual helpdesk” in the designated languages to provide support service in terms of providing information relating to Travel & Tourism in India to the domestic and International tourists and to assist the callers with advice on action to be taken during times of distress while travelling in India and if need be alert the concerned authorities.

ii. All the Chief Ministers of the State Governments and Administrators of UTs have been asked to take immediate effective steps for ensuring a conducive and friendly environment for all tourists and also requested them to publicize the steps being taken/proposed to be taken to increase the sense of security amongst the present/prospective visitors and also to counter the negative publicity, if any.

iii. The National Tourism Ministers’ Conference convened on 21st August, 2014 in New Delhi resolved that the Departments of Tourism of all States and UTs will work for ensuring the safety and security of tourists, especially women.

iv. Adoption of code of conduct by the Indian travel and tourism industry for Safe and Honourable Tourism, which contains a set of guidelines to encourage tourism activities to be undertaken with respect to basic rights like dignity, safety and freedom from exploitation of both tourists and local residents, in particular women and children.