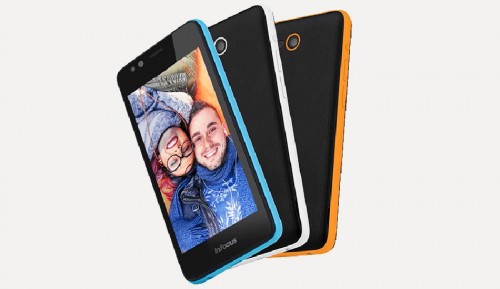 InFocus has introduced a new smartphone in the Indian market named Bingo 21 priced at Rs.5,499. The device is listed on Snapdeal and the company's website and will be available in blue, white and orange variants from 11th February, 2016.

In terms of specifications, the InFocus Bingo 21 has a FWVGA screen 4.5 inches with a resolution of 850 x 480 pixels. It is powered by a Shark L SC9830 1.5 GHz quad-core processor coupled with 2GB of RAM. Running Android 5.1 Lollipop with InLife UI 2.0, the device includes an internal memory of 8GB which can be further expanded up to 64GB via a microSD card.

The InFocus Bingo 21 comes with a 8 megapixel rear camera with F / 2.2 aperture, auto focus and LED flash and also a 5MP front camera with LED flash. It also features an ambient light sensor, proximity sensor, gyroscope, accelerometer and magnetometer on the smartphone. On the connectivity front, the device has 4G LTE, Wi-Fi 802.11 b / g / n, FM radio, Bluetooth 4.0, microUSB, GPS and a 3.5mm audio jack respectively.

December last year, InFocus has launched the M680 smartphone priced at Rs 10,999. In terms of specifications, the device sported a Full HD screen of 5.5 inches with a resolution of 1080 x 1920 pixels with 401ppi density. It was powered by a MediaTek MT6753 octa-core processor clocked at 1.5 GHz associated with 2GB of RAM. It also comes with internal memory of 16 GB which can be further expanded up to 64GB via a microSD card. Among other features, it sported a rear 13-megapixel front camera. InFocus M680 run on Android 5.1 Lollipop.