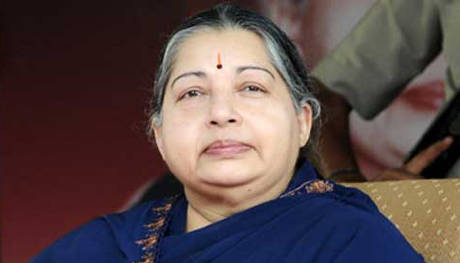 Tamil Nadu is in High alert after the death rumor of Chief Minister, Jayalalitha. She is known as “AMMA” (Mother) in Tamil Nadu. Jayalalithaa was born on 24 February 1948.

Jayalalitha Jayaram, is an Indian politician and the Chief Minister of Tamil Nadu, in office since 2015. Previously she served as Chief Minister from 1991 to 1996, in 2001, from 2002 to 2006 and from 2011 to 2014. She was an actress before her entry into politics and appeared in 140 films which includes Tamil, Telugu, and Kannada films. As a leading actress in films from 1961 to 1980, she was considered as one of the most prolific and most versatile actress having appeared in films of different genres and for performing wide variety of characters. She was also known for her dancing skills.She is referred to as the queen of Tamil cinema. She is the general secretary of All India Anna Dravida Munnetra Kazhagam (AIADMK). She is popularly referred to as Puratchi Thalaivi, Thanga Gopuram, Thanga Chillai and Thanga Tharagai (Golden Maiden) by her followers. In 2001, an additional letter “a” was appended to the spelling of her name for reasons related to numerology.

As an actress, she frequently worked with another actor-turned-politician, M. G. Ramachandran (MGR). This led to wide speculation that Jayalalitha was introduced to politics by MGR. However, she has denied these claims and stated that she had entered politics by choice. She was a member of the Rajya Sabha, elected from Tamil Nadu, from 1984 to 1989. Soon after the death of MGR, Jayalalitha proclaimed herself his political heir. She is the second female chief minister of Tamil Nadu after Janaki Ramachandran.

Jayalalithaa became the first incumbent chief minister in India to be disqualified from holding office due to conviction in a disproportionate assets case on 27 September 2014. On 11 May 2015, the Karnataka High Court acquitted Jayalalithaa in the disproportionate assets case, and she resumed office as Chief Minister on 23 May. She was subsequently re-elected by the electorate of the Dr. Radhakrishnan Nagar constituency of North Chennai in a by-election held on 27 June 2015.