TAIPEI, TAIWAN - Media
OutReach - 7 November 2018 -  JPlay, one of
the world's first blockchain-powered eSports platforms, officially launched on
1 Nov 2018  in Taipei. The company laid
out their future plans, showcased their integration on the popular game
streaming app Soocii, and formed strategic alliance with DGames. 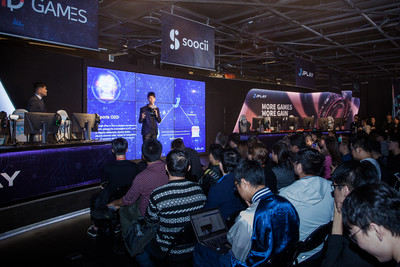 To celebrate and get the gaming community involved, JPlay has launched
airdrop and distributed their JPT digital assets to over 10,000 users through Soocii
and topped it off with a pulsating LoL match between players from well-known eSports
franchises J Team and ahq.

Viewers can use JPT to get their hands on limited edition eSports gear
and merchandise, such as their favorite team's signature T-shirts, headphones
and backpack.

Soocii CEO Ted Huang said: "We're very happy to welcome JPlay into the
Soocii gaming community today. JPlay's blockchain and smart contract technology
will help to accelerate Soocii's vision where both mobile gamers and content
creators are rewarded fairly for their efforts and our whole ecosystem grows as
a result."

JPlay Teams up with DGames

The company will enter into a strategic partnership with blockchain
gaming ecosystem DGames that will utilize blockchain technology in promoting
eSports in the APAC region.

It is further announced that they are
developing an eSports main-chain platform and self-managed communities
across country borders. That supports SME and IT
developers in exploiting the full potential of the platform for future
applications with its own side chain.  Highlighted
features:

Financial support directly from their community will enable
independent game developers to raise funds and release demos on the JPlay main-chain
in order to build quality games without the constraints of major gaming firms.

Match wagers have always been popular with the gaming community. JPlay
is set to develop a fair, transparent and legitimate eSports ecosystem with the
help of smart contracts, which govern the whole gaming.

In order to provide a bridge
between the eSports world and traditional brick-and-mortar industries, JPlay's
will link up with physical merchants such as restaurants, retailers, hotels,
and ticketing houses