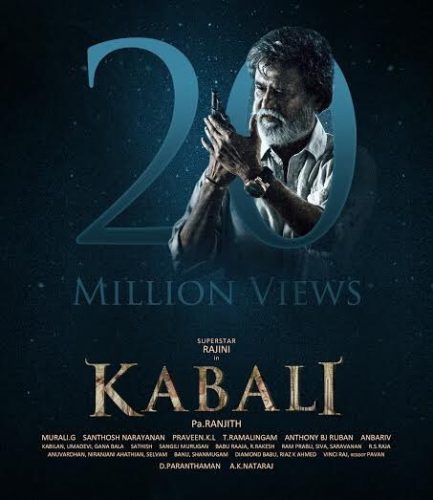 Rajinikanth again proved himself as a megastar by this movie Kabali. The film is releasing on 21st July, 2016 (tomorrow). The film will be simultaneously released in Singapore, Malaysia,India, UK, US and Indonesia. Kabali will also premiere at the Le Grand Rex in Paris, France. The satellite rights of the film were sold to Jaya TV.

Kabali is going to be a super hit movie and its poisoned to break all the Indian Movies collection record. The total production cost of the movie is around Rs.160 Cr. The production house had already collected Rs.200 Cr before the movie release by selling the rights.

Kabali Movie Review: A Movie you should not miss.
Rajinikant (Kabaleeshwaran) is an aged gangster in this movie. The movie take you through a amazing plot. Rajinikant (Kabaleeshwaran) is tring to protect his family and his business from his enemies. This is the story of this Super hit movie Kabali. Rajinikant's name is this movie is Kabaleeshwaran. We need not have to mention about the acting of Rajinikant. As said he is a Megastar, he again proves the same in this movie. The role of Kumudhavalli is done by Radhika Apte. Jeeva's role is done by Dinesh Ravi. Rajinikant shows us how a real gangster should be.

Facts about Kabali
The total budget of this movie is around Rs.160 Crores.
Before the movie release the movie had already earned Rs.200 Crores.
Kabali will be released on 5000 screens worldwide, out of which 500 screens are in USA only.
More than 2 Crores peoplehad already watched the Kabali Trailer
The movie will be released in Malaysia, Chinese, Thai, Telugu, Hindi, Malayalam and Tamil languages.
The makers of the film had earlier considered using title Kaali, which was the title of Rajinikanth's 1980 film,but later changed to Kabali.