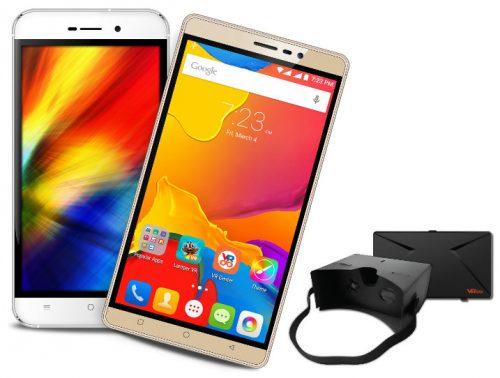 In terms of specifications, the Karbonn Quattro L52 comes with a 5-inch HD 2.5D curved glass display with a 720 x 1280 pixel resolution. It is powered by a 1.3GHz dual-core processor, paired with 2GB RAM. The device includes an internal storage of 16GB (ROM) which can be further expanded up to 32GB via microSD card. It comes equipped with an 8MP rear camera with Sony sensor and a 5MP front facing camera for selfie. The dual-SIM smartphone packs in a 2250mAh battery which will be able to deliver up to 6 hours of talk time and a standby time of up to 300 hours.

Karbonn Titanium Mach 6 features a 6-inch HD display with a 720 x 1280 pixel resolution. It is powered by a 1.3GHz quad-core processor with 2GB RAM. It comes with 16GB of inbuilt storage (ROM) that can be further expanded up to 32GB via microSD card. It features an 8MP rear camera along with a 3.2MP front facing camera for selfie. Karbonn Titanium Mach 6 is running on Android 5.1 Lollipop, the device is powered by a 3300mAh battery.

Karbonn VR Glasses is made of ABS plastic fibre. It can offer an “enhanced, theater-like experience.”. The glasses come fitted with bi-convex lenses which augment a video to provide a theater-like experience. The new smartphone comes with pre-installed games and video content for users. Another feature is Users can create their own VR videos using a exclusive pre-embedded VR app in the phone.