SEOUL, SOUTH
KOREA - Media OutReach -
14 January 2020 - 2019
was a huge year for #KpopTwitter,
as Kpop remains an undisputable force that continues to make waves across the
world. With an amazing record of 6.1
billion Tweets in 2019, which was 15% higher than in 2018, Twitter shows
that it is the best place to find out what's happening with all things Kpop,
and to join in the conversations with like-minded Kpop fans around the world!

While
Kpop gained popularity in South Korea 25 years ago, it is only in recent times
through the power of millennial fans worldwide that Kpop-related conversations
have gained traction across the world on Twitter. Here are the top 10 countries that Tweeted the most about Kpop in 2019: 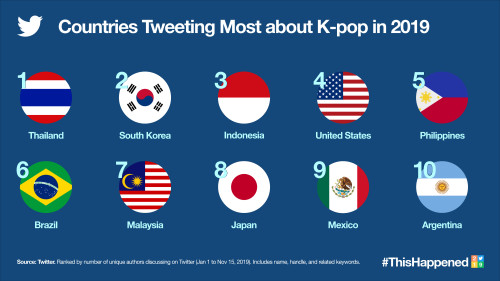 Additionally,
countries such as Canada, France, Great Britain, India and Turkey were also
amongst the top 20 countries that were Tweeting the most about Kpop.

Once
again, the BTS Army demonstrated their power by propelling BTS (@bts_twt)
member Jungkook's video Tweet of him dancing to Billie Eilish's (@billieeilish) "Bad Guy" to become the most Retweeted
Tweet (aka the Golden Tweet)
worldwide in 2019.

Popular
Kpop bands BTS (@BTS_twt),
EXO (@weareoneEXO) and GOT7 (@GOT7Official) continued to lead our global list for most discussed #KpopTwitter accounts, but we also saw a trend of
individual team member accounts rising above the crowd such as Baekhyun (@B_hundred_Hyun) and BamBam (@BamBam1a). 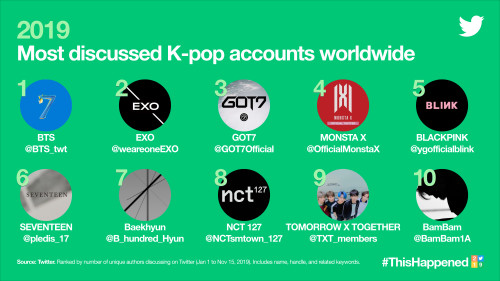 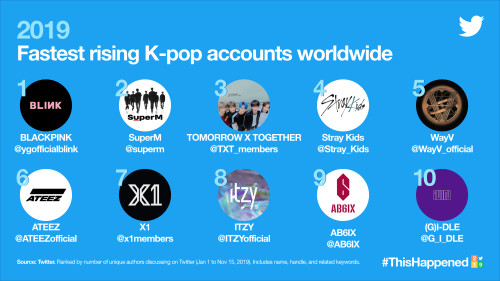 In
2019, Twitter Korea hosted a total of 67
#TwitterBlueroom sessions with various Kpop bands and
artists, connecting fans globally to their favourite Kpop stars by bringing
exclusive interviews and Q&A sessions for them to get closer to their
idols. Kpop stars that joined us in the Blueroom this year included ASTRO (@offclASTRO), Eric Nam (@ericnamofficial), IZONE (@official_izone), ONEUS (@official_ONEUS), just to name a few. Fans could participate by Tweeting
their questions to their idols, and using the hashtag #WhosNext4TwitterBlueroom to nominate who they would like to see
in the next #TwitterBlueroom.

Amongst
the #TwitterBlueroom sessions that took place this year,
SuperM (@SuperM), the super group that consists of
representative Kpop idol members, broke the record for the most watched #KpopTwitter Blueroom with over two million total
viewers.

Co-founders
of Twitter, Jack Dorsey (@Jack) and Biz Stone (@biz),
made a stop in South Korea to join globally acclaimed Kpop band GOT7 (@GOT7Official) for a #TwitterBlueroom session, recording over 1.1 million
views! During the live broadcast, which lasted approximately 30 minutes,
Jack, Biz and GOT7 members answered fan questions posted through the hashtag #JACKmeetsGOT7 -- their discussion included Jack and
Biz's experiences in Korea, how Twitter is a great platform for GOT7 to engage
their fans on a more personal level, and what would each one of them do if they
had two weeks to do anything they want.

Beyond
music, fashion also plays an instrumental role in Kpop and Kpop stars have been stealing the spotlight at major fashion events. Kpop idols Sandara Park (@krungy21) and ITZY (@ITZYofficial) have partnered with Twitter to bring exclusive content for their fans by hosting live #KpopTwitter Blueroom and Q&A sessions direct
from Paris Fashion Week (#PFW).

With Twitter, Kpop fans worldwide can now join in the conversations
around the biggest Kpop award shows and events worldwide, such as KCON 2019 (@KCON_Global)
and the 2019 Mnet Asian Music Awards (#2019MAMA).

During KCON 2019, an annual
Korean-culture convention held across four cities worldwide, 40 million related
Tweets along with 28 million views on KCON-related videos were generated.
GOT7's (@GOT7Official) Tweet shared by KCON Thailand (@KCONThailand) emerged as the most retweeted Tweet
from KCON 2019.

#2019MAMA, the most important Kpop awards
ceremony that wraps up the year, was one of the #KpopTwitter moments that fans across the world did not want to miss.
From October 24, the date which the #2019MAMA vote was started, to December 4, the
day of the event, the fans from around the world generated around an astounding
102 million Tweets on Twitter. BTS'
Red Carpet 360 Camera video that was posted on MAMA's official
Twitter account (@MnetMAMA) was the most retweeted Tweet from the
event.

At
all these events, we saw spikes in conversations as Kpop fans kept themselves
updated through a flurry of Tweets expressing their love for their favourite
artists and idols. Exclusive content were shared  on the respective Twitter official handles --
such as Red Carpet Live Streaming and Twitter Mirror, a special video format
where Kpop idols' autographs were created, receiving fervent love and response
from their fans. From the East to West, fans can now get easy, real-time access
to what's happening at all their favourite Kpop events on Twitter.

YeonJeong
Kim, Head of Global Kpop Partnerships for Twitter said, "Twitter serves as the
bridge for Kpop to the world, enabling fans to get the fastest news and drive
conversation about Kpop. As a live public conversational platform, Twitter will
continuously drive various partnerships with top and emerging Kpop artists as
well as global events like MAMA and KCON to accelerate the rise of Kpop
globally in 2020."

In
2020, even more exciting and colorful Kpop moments await us. #TwitterBlueroom will be back and better than ever, and
the highly anticipated comeback album of BTS (@bts_twt)
to be announced this February, is already drawing Kpop fans around the world to
Twitter.

Come
and join the #KpopTwitter conversation today to see and talk
about your favourite Kpop idols and stay updated everyday with other Kpop fans
around the world!

Twitter, Inc. (NYSE: TWTR) is what's happening in the world and
what people are talking about right now. On Twitter, live comes to life as
conversations unfold, showing you all sides of the story. From breaking news
and entertainment to sports, politics and everyday interests, when things
happen in the world, they happen first on Twitter. Twitter is available in more
than 40 languages around the world. The service can be accessed at twitter.com,
on a variety of mobile devices and via SMS. For more information, visit about.twitter.com
or follow @TwitterKorea. For information on how to
download the Twitter and Periscope apps, visit twitter.com/download
and periscope.tv.