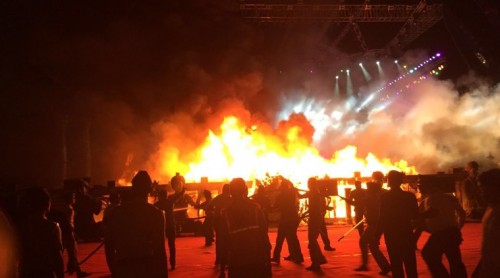 The fire broke out around 8:22 p.m. was brought under control, Chief Minister Devendra Fadnavis told reporters.

Nearly 7,000 people, including dignitaries and Bollywood stars, were evacuated within the first 10 minutes. Immediately after the fire broke out around 8.20 pm, officials said, a pre-approved disaster management plan for the event that had been practised in advance was activated. “It was executed well,” said a senior fire department officer.

There were no immediate reports of casualties.

"Very unfortunate occurrence of fire in cultural program organised by GoM at Mumbai. No casualties reported, no one is injured," he added.

He said the "venue was evacuated immediately" and that "a comprehensive inquiry into the incidence of fire will be conducted to ascertain reasons".

Deputy commissioner of Mumbai police Dhananjay Kulkarni also said there were no reports of any casualties.

Bollywood actors Amitabh Bachchan and Aamir Khan were among those who had to be evacuated when a big fire broke out at a lavish cultural show in Mumbai.

The show was part of an economic event, "Make in India", designed to encourage foreign investment.

The blaze was brought under control in quick time by 14 fire engines and 10 water tankers with swift evacuation of thousands of people.

The exact cause of the fire that broke out one hour after the entertainment segment had begun was not known but state BJP spokesman Atul Shah, who was seated in the front row, said the fire apparently broke out from beneath the stage. Shiv Sena MLA Vijay Shivtare said a spark was noticed beneath the stage, which was a "wooden structure", before the fire broke out. Shivtare said there were 500 artistes behind the stage and an estimated 50,000 people, several of them VIPs, had assembled at the venue.

Actor Vivek Oberoi, who was at one of the flanks of the stage and was getting ready to perform another event, said the flames leapt 4O to 50 feet high and there was threat of it spreading to nearby tents beause of the strong sea breeze but things were brought under control because of timely coordination between various agencies.

The blaze broke out when a lavani (dance) performance was underway.