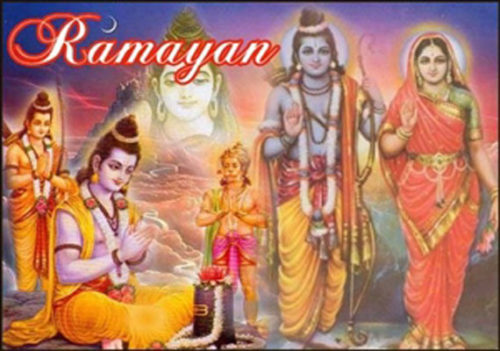 A Lesser Known Story From The Ramayana

After a long journey, Sri Ramchandra and the army of monkeys, reached the southern coast of our vast land and beheld the expanse of water separating them from Sri Lanka. The search for Sita was over; Rama now knew where she was; it only remained to redeem her from Ravana, by peaceful persuasion if possible or by war, if necessary. In line with our tradition of seeking Divine help, before commencing any work, Sri Ram desired to consecrate and offer worship to Shiva.
Arrangements were soon completed, except finding a suitable priest to guide the function. Sri Ram thought for a while and then decided on the best person available nearby - Ravana the king of Sri Lanka. Without hesitation he bade Hanuman to fly to Ravana’s palace and request him to conduct the pooja.
There was considerable shock and dismay among the assembly; to invite an enemy to conduct a pooja, specially meant to conquer and destroy him! Will Ravana accept such a preposterous invitation?
But Hanuman as a loyal soldier implicitly obeyed the royal command and flew to Sri Lanka to convey the message to Ravana. Men and women around him were also deeply shocked, surprised and mystified at this strange invitation from the prince of Ayodhya.
Ravana, true to his stature as a great pundit in Vedic literature, true to the tradition that as a Brahman, he should never decline an invitation to organize Divine worship, and true to his intense devotion to Lord Shiva accepted the invitation.

He came with Hanuman to Sri Ram’s place, much to the consternation of everyone. Soon the king of Sri Lanka made an inspection of all arrangements, and turning to Sri Rama, said,

"O prince of Ayodhya, though you have made very satisfactory arrangements, you are not qualified to install the idol of Lord Shiva in the absence of your wife. Our edicts declare that no person, however high, can perform such ceremonies without his consort nearby".

The mood of the entire assembly now changed from confusion to curiosity - how would Sri Rama react?

"We have invited you for the flawless performance of the ceremony. You have pointed out a flaw in tune with your duty as a pundit; I thank you for it. I now invite you to provide a solution, which also forms part of your duty".

This exposition of Dharmic postures and privileges between the greatest of kings and the noblest of men , was becoming even a treat for the Gods!

The king of Sri Lanka was not only a great ruler but also a great scholar. The scholar in him rose to the occasion now and Ravana said,

"O Rama, I can and shall provide a solution, since I do not wish to bear the blame for non-performance of Divine worship, but on one condition. I shall arrange to bring Sita here for the pooja but you should permit her to return to my place after the function".

All around, were astounded and speechless at the clash of wit and fantasy of words between the two great men and waited with bated breath for Sri Rama’s rejoinder. The noblest of men, simply and cheerfully accepted the offer, and the ceremony was completed in all solemnity. As per Indian customs and traditions, after viewing the couple, Ravana said “Let victory be yours!” though he knew well, those words meant his own destruction. Here was human values surpassing all constraints of Self.

Only one more formality remained, that of honoring the priest. Sri Rama invited Ravana himself to suggest the fees for the function. It was at this moment that the greatest and the most crucial episode of Ramayana unfolded before an unbelieving audience.

Ravana, the king would not take any fees, not even from Sri Rama, as he was always at the giving, and not the receiving end of fees or favors. But again the vedic pundit in him came to the fore.

"Sri Rama, knowing you very well, the only fees I solicit is that you stand by me when my life departs".

And thus it came to pass, that when Ravana lay in his last moments Sri Rama was near him. It only reveals that ultimate comfort for everyone high or low is to have Divinity nearby at the moment of death.