SEOUL, SOUTH KOREA - Media
OutReach - 23 October 2020 - #TwitterBlueroom,
live-streams that have been drawing the attention of Kpop fans around the
world, will now feature K-Drama (Korean Drama). 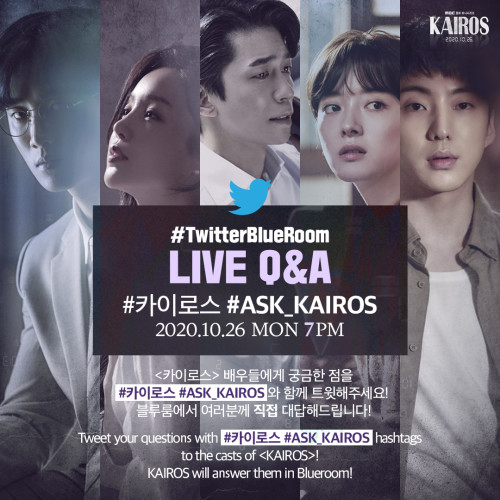 Twitter announced that it will be
livestreaming a #TwitterBlueroom before the premiere of 'KAIROS'. KAIROS is a
new mini-series drama of MBC that will be broadcasted every Monday and Tuesday.
Leading actors of the show, Seongrok Shin, Seyoung Lee, Bohyun Ahn, Gyuri Nam
and Seungyun Kang will be appearing on the livestream to communicate with their
global fans in real time. Adding to the star-studded lineup, Seungyun Kang of
Kpop group 'WINNER' will be serving as MC for this unprecedented livestream.

KAIROS will be the first Korean drama
(K-Drama) to participate in a #TwitterBlueroom Live. #TwitterBlueroom
livestream events have featured celebrities from various walks of life,
including those making a name in Kpop, Kmovie, culture, politics, and social
issues. '#TwitterBlueroom LIVE with KAIROS' will start at 7 PM KST on October
26, two hours and 20 minutes prior to the broadcast of the premiere episode of
KAIROS on MBC. Livestream can be viewed on MBC Drama's official Twitter account
(@mbcdrama_pre) or the official account
of Twitter Korea (@TwitterKorea).

Global fans of K-Drama will have
exciting opportunities to interact with the cast of KAIROS:

Twitter also launched special emojis
to commemorate the show on its premiere date. Using the concept of KAIROS, these emojis can be
applied to Tweets by using the hashtags #????, #KAIROS and #ASK_KAIROS.

YeonJeong Kim, Head of Global Kpop & Kcontent
Partnerships at Twitter commented, "Twitter is a platform where conversations
encompassing various fields from Kpop, Kmovie to K-Sports happen in real time.
We see great potential with K-Drama as well. Fans of K-Drama worldwide actively
share their stories on Twitter either while they're watching a broadcast or
after. KAIROS, the first ever Korean drama to host #TwitterBlueroom LIVE
Q&A, is already generating quite an interest from global fans even before
its premiere. Twitter will keep supporting K-Drama to connect with its global
fans, and to help global fans build a bridge to various K-Content in the
future."

KAIROS (script by Suhyeon Lee,
directed by Seungwu Park, produced by OH Story and Blossom Story), is a
time-crossing thriller featuring a man named Seojin Kim (played by Seongrok
Shin) who is devastated after his young daughter is kidnapped. Seojin works
together with a woman a month in the past, named Aeri Han (played by Seyoung
Lee),who is looking for her missing mother. The two characters must fight and
run across different times for their loved ones.