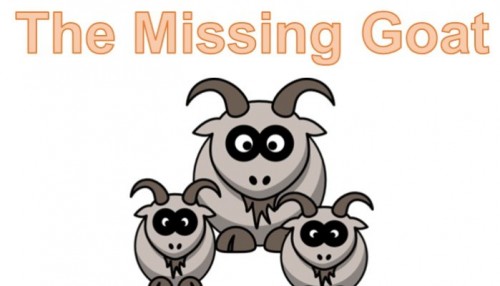 It all started one lazy Sunday afternoon in a small town near Toronto in Canada.

They rounded up three goats from the neighborhood and painted the numbers 1, 2 and 4 on their sides.

That night they let the goats loose inside their school building.

The next morning, when the authorities entered the school, they could smell something was wrong.

They soon saw goat droppings on the stairs and near the entrance and realized that some goats had entered the building.

A search was immediately launched and very soon, the three goats were found.

But the authorities were worried, where was goat No. 3?

They spent the rest of the day looking for goat No.3.

The school declared classes off for the students for the rest of the day.

The teachers, helpers, guards, canteen staffs, boys were all busy looking for the goat No. 3, which, of course, was never found.

Simply because
it did not exist.

Those among us who inspite of having a good life are always feeling a "lack of fulfilment" are actually looking for the elusive, missing, non-existent goat No.3.

Whatever the area of complaint or dissatisfaction, relationship, job-satisfaction, finance, achievements, ......
An absence of something is always larger than the presence of many other things.

Stop worrying about goat No.3