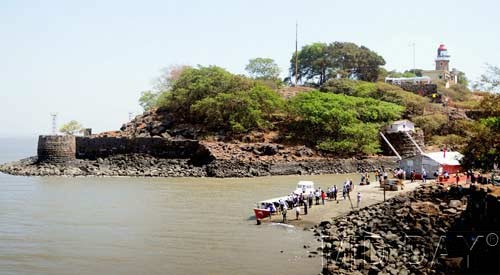 Union Minister for Shipping and Road Transport & Highways Shri Nitin Gadkari recently laid the foundation stone for construction of a passenger jetty at Kanhoji Angre Island in the presence of Union Minister for Heavy Industries & Public Enterprises, Shri Anant Geete and the Chief Minister of Maharashtra, Shri Devendra Fadnavis. The passenger jetty being constructed by Mumbai Port Trust at a cost of Rs.16 crore is a part of the project for development of Kanhoji Angre Island as a tourist destination.

Kanhoji Angre light house was constructed on the island by the erstwhile Government of Bombay at an expenditure of Rs.1.22 lakhs in the year 1867. It was further upgraded in the year 1902-03 at an expenditure of Rs.82,000/- by Mumbai Port Trust. Since then the port was maintaining the light house till 2007. In 2007, operation and maintenance of the light house was transferred to the Director General of Lighthouses & Lightships (DGLL). The Port has also leased an area of 8000 sq.m. on the island to Indian Coast Guard at a nominal rent of Rs.1 per annum to install a radar system for coastal surveillance.

Development of Kanhoji Angre Island as a tourist destination by Mumbai Port Trust in conjunction with Maharashtra Tourism Development Corporation, is an attempt to boost tourism in the state. The port has given “in principle” NOC to MTDC for undertaking works related to tourism promotion on the island. The jetty being constructed by the port will facilitate smooth berthing of passenger boats and embarkation/ disembarkation of passengers at the island.