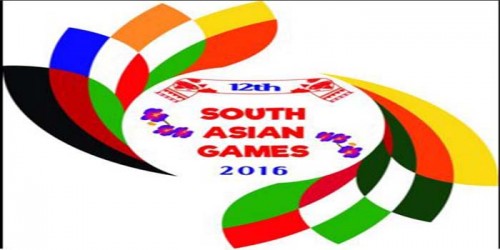 The Prime Minister Shri Narendra Modi today inaugurated the 12th South Asian Games, 2016 in a glittering ceremony at the Sarusajai Sports Complex in Guwahati before a rapturous and capacity crowd . A host of dignitaries were present on the occasion including, the Union Minister of Youth Affairs and Sports(IC), Shri Sarbananda Sonowal, the Chief Minister of Assam Shri Tarun Gogoi , the Chief Minister of Meghalaya Shri Mukul Sangma, the Governors of Assam and Meghalaya , the Union Petroleum Minister Shri Dharmendra Pradhan among others. The event was telecast live on Doordarshan to millions homes across the region.

Declaring the Games open, Prime Minister Shri Narendra Modi, welcomed all participants. Espousing on the theme of ‘Atithi Devo Bhabo’, he urged all to enjoy the hospitality and scenic beauty of the North East and compete with togetherness, teamwork and talent. The Prime Minister further said that his vision for South Asia is the same with his vision for India -- that is, Sabka Saath, Sabka Vikas. Describing the Games as a springboard for the overall development of the North East India, India as a whole and the South East Asia, he asked all to play for Peace, Prosperity and Progress. He also said that 21% population of the world resides in South East Asia contributing 9% of the world economy. He said that this Game will further strengthen cooperation among the SAARC countries.

The inauguration ceremony was started by the team parade. The participating nations, decked out in their traditional dresses made their way into the ground amidst huge cheers from the packed audience. Each participating nations carried waters from one of their major rivers and the Indian Ocean. The waters were later merged into the Brahmaputra, symbolizing the confluence of the nations and the way forward in harmony and togetherness.

The Flame of the 12th South Asian Games was brought into the grounds by Gagan Nareng and was relayed through by eminent sport personalities including Monalisa Mehta, Bhogeshwar Baruah, Anju Bobby Goerge , Krishna Poonia and Rani Nagpal. Baichung Bhutia did the final lap and lit the digital flames in the centre of the ground.

The cultural show, which followed the flame lighting ceremony was a glittering spectacle showcasing the confluence of the digital and the traditional. Immersing the grounds in a show of vivid colours and lights ,the show started with the theme song of the Games, ‘Ai Prithibi Ek Krirangan’. The song originally composed by Dr. Bhupen Hazarika, it was performed by artists’ Mayukh Hazarika, Lou Majao and others and spreads the message of peace and harmony through sports. It was followed by a colourful display of the traditional dances of the region and song performances by artists like Zubin Garg, Angaraag Mahanta and Nahid Afrin.

Speaking on the occasion, Union Minister of Sports and Youth Affairs (IC), Shri Sarbanada Sonowal welcomed all participants to the states of Assam and Meghalaya and spoke on the huge opportunity the Games represented for the North East. Chief Minister of Assam Shri Tarun Gogoi, compared the mascot Tikhor to the spirit of the Games and espoused all to imbibe the values represented by him. Chief Minister of Meghalaya, Shri Mukul Sangma, echoing the same sentiments stated that the North East comprises of a great talent pool of sports and asked all participants to indulge in the distinct lifestyle and culture the region represents.

The 12th South Asian Games, 2016 is the first international multi-sporting mega event in the North Eastern region. Athletes from eight member countries namely – Afghanistan, Bangladesh, Bhutan, India, Maldives, Nepal, Pakistan and Sri Lanka will be participating. Around 3500 athletes and sports officials from 8 countries are participating in the biggest ever sporting spectacle in the North East India.