BERLIN, GERMANY - Media OutReach - January 16, 2020 - The
world's sports media have cast their votes and the Nominees for the landmark 20th
Anniversary Laureus World Sports Awards have been confirmed. The greatest
sportsmen, sportswomen and teams now have just over a month to wait to see if
they have won a prestigious Laureus Statuette at the world's pre-eminent
international sports Awards Ceremony in Berlin on February 17. 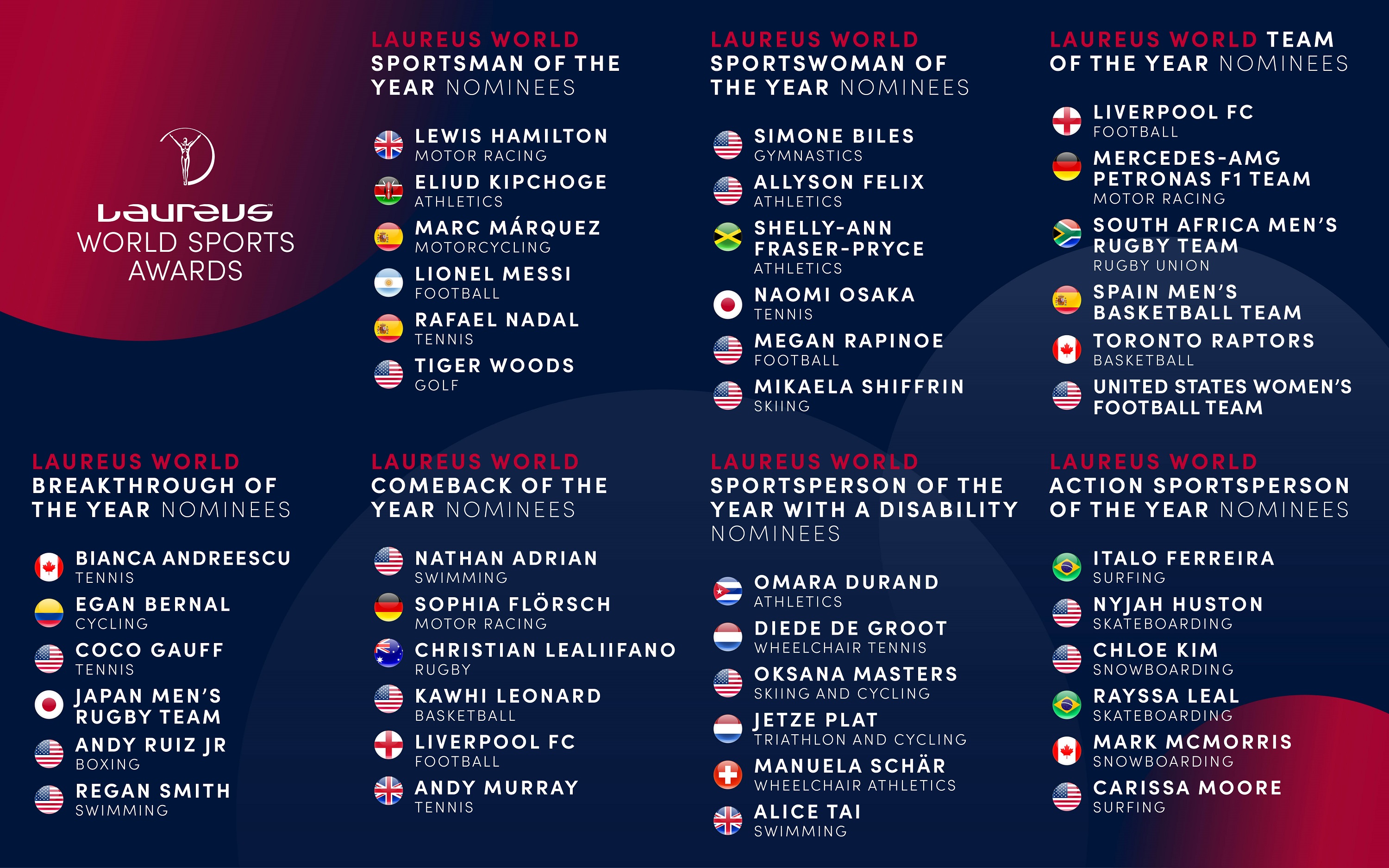 Three-time Laureus Award winner and world No. 1 tennis star Rafael
Nadal is in contention for the Laureus
World Sportsman of the Year Award
alongside six-time Formula 1 World champion Lewis Hamilton, six-time World
MotoGP champion Marc Márquez and six-time FIFA World Footballer of the
Year Lionel Messi. Also nominated are Eliud Kipchoge, the first
athlete to run a marathon in under two hours and golf legend Tiger Woods,
who won his 15th Major Championship at The Masters.

The Laureus World Comeback of
the Year Nominees personify the true spirit, determination and tenacity
of athletes who have overcome hurdles to return to the playing field. Andy
Murray, who won his first ATP title in 31 months at the European Open
following two hip operations, is in contention alongside UEFA Champions League
semi-final comeback kings Liverpool, unusually nominated in two
categories. Also nominated are 19-year-old German Formula 3 driver Sophia Flörsch,
who returned to racing after her car hit a fence at 170mph during a race in
2018, Australian rugby star Christian Lealiifano who returned to
represent his country in the Rugby World Cup after battling leukaemia,
basketball star Kawhi Leonard, who overcame injury to help the Toronto
Raptors to their first NBA Championship and US swimmer Nathan Adrian who
recovered from testicular cancer to win his 15th and 16th
world titles.

Sports fans can also have a say in the 20th anniversary
Laureus World Sports Awards through the Laureus Sporting Moment: 2000 -- 2020
public vote, which will celebrate the transformational power of sport and reinforce
Laureus' 20th anniversary message that 'Sport Unites Us'. The Laureus Sporting Moment
Award shortlists 20 sporting stories from the last 20 years that have
left their mark on the world, exemplifying sporting values such as fair play,
sportsmanship, humanity, overcoming adversity, dedication and the power to
unite through sport -- all key values of the Laureus movement. Sports can vote
for their favourite of the 20 shortlisted moments now at laureus.com/vote.

It was at the inaugural
Laureus World Sports Awards in 2000 that Laureus Patron, Nelson Mandela, spoke
the words which sparked the creation of the worldwide Sport for Good movement. 20 years on, these words still guide Laureus
today - 'Sport has the power to change the world; to unite people in a way
little else does'. From sports stars to sports fans and the young people in
Laureus Sport for Good programmes around the world: Sport Unites Us.