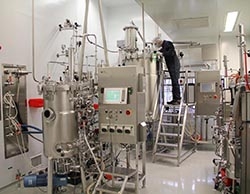 Romiplostim has been produced with a proprietary and innovative continuous manufacturing process at the company’s Finnish-based facility in Oulu-Finland. Romiplostim is used for the treatment of thrombocytopenia (low platelet count) in patients with chronic immune (idiopathic) thrombocytopenic purpura (ITP).

ITP is a potentially serious blood disorder characterized by increased destruction and impaired production of platelets. It can lead to extensive bruising and bleeding. Thrombocytopenia is common in cancer patients, resulting from chemotherapy or radiation treatment, in addition to the underlying disease itself. ITP leads to several complications. Low platelet count increases spontaneous bleeding, complicates surgical operations and can affect chemotherapy and radiation therapy.

By manufacturing its first batches of the Romiplostim biosimilar, Paras Biopharmaceuticals is in a position to prepare to initiate GMP batches of the drug substance and formulation in 2019 within its Romiplostim biosimilar development program. “The development and implementation of this commercial-scale manufacturing process for Romiplostim is not only good news for the company but the wider healthcare environment,” said Dr Ashesh Kumar, CEO & Director: Biologics & Licensing.

“The company is evaluating completed batches to assess comparability and looks forward to finalizing this work in the anticipation of supporting clinical trials & approvals for commercial supply on patent expiry in Europe and USA,” says Dr Mark Jackson Research & Admin Group, Paras Biopharmaceuticals.

Global occurrence of ITP is increasing, and a growing number of patients diagnosed/reported to be affected. Current costs of available medicines are very expensive primarily due to higher production costs and inefficient production processes. Current yearly treatment in USA can cost up to $55250 USD per year for each ITP patient. With Paras Biopharmaceuticals efficient production technologies, the company aims to provide affordable healthcare treatment options to patients suffering from ITP.

Paras Biopharmaceuticals has a fully equipped microbial production facility in Finland for the production of recombinant therapeutic products. With a total floor area of 25,000 ft2 and a classified cleanroom of 4,300 ft2, other features include media and buffer preparation, live area (fermentation and harvest & extraction), purification suite (incl. +4°C cold room), final filtration and freeze-drying.

*Nplate® is a registered trademark of Amgen Inc.