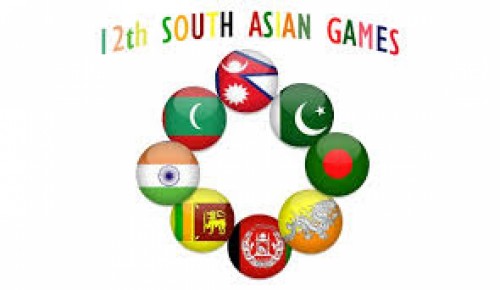 The Prime Minister Shri Narendra Modi will inaugurate the Games on 5th February 2016 evening at Guwahati in a glittering ceremony. 12th South Asian Games are to be held in Guwahati & Shillong from 5th Feb, 2016 to 16-Feb-2016 and will be the biggest sporting extravaganza ever held in the North East India and the 1st ever gender equal South Asian Games with men & women participation in all the sports. For conduct of the games an organizing committee has been set up under the Chairmanship of Shri Sarbananda Sonowal, Minister of State for Youth Affairs & Sports (I/C) Government of India and Shri N. Ramachandran President Indian Olympic Association as co - chairman.

SAARC nations namely Afghanistan, Bangladesh, Bhutan, India, Maldives, Nepal, Pakistan and Sri Lanka will be participating in the games. SAARC nations comprise 21% of the world's total population and around 9.12% of Global economy. SAARC is a platform for the people of South Asia to work together in a spirit of friendship, trust and understanding so as to achieve lasting peace and prosperity of its member nations. South Asian Games play a vital role in achieving this objective.

Games logo symbolizes peace, progress & prosperity in the region. It consists of 8 petals representing the 8 countries participating in the Games. Colors of petals are from the flags of the 8 countries. Mascot “TIKHOR” a Baby rhino is Sharp, Naughty, Sporty & Modern. He is a Motivator, friend and messenger of peace, progress & prosperity. The theme song is ‘Ei Prithibi Ekhon Krirangon, Krira Hol Shantir Prangon’ sung by the world famous musician late Dr. Bhupen Hazarika. It means that the whole world is a playground and sports is a symbol of peace. The song is being translated in official languages of all SAARC nations and will be sung in each of these languages.