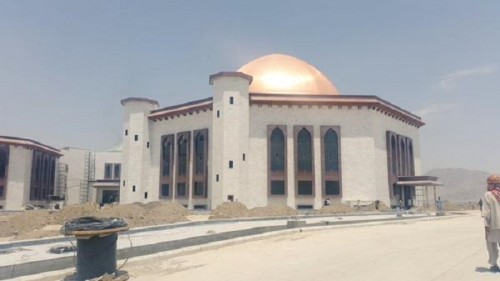 The Union Cabinet, chaired by the Prime Minister Shri Narendra Modi today gave its ex-post facto approval for completion of the Afghan Parliament Building in Kabul by 31st December, 2015 at a revised project cost of Rs.969 crore.

The project provides for completion of a new Parliament Building for Afghanistan, keeping in view the traditions and values of Afghanistan. It is part of India’s efforts in the reconstruction and rehabilitation of Afghanistan. The project is a visible symbol of India’s contribution to strengthening and rebuilding democracy in Afghanistan. The construction of Afghan Parliament Building has been completed in December, 2015 under India-Afghanistan development cooperation and minor touch-up works, including parts of sound system and furniture are now being undertaken. The Parliament building will be handed over the Afghan authorities by 31st March, 2016.

The project was inaugurated and dedicated jointly by Prime Minister of India and President of Afghanistan on 25th December 2015. Addressing the Members of Meshrano Jirga (Upper House) and Wolesi Jirga (House of the People) on the occasion in the newly inaugurated premises, the Prime Minister complimented the people of Afghanistan and their elected representatives on consolidation of democracy in the country.