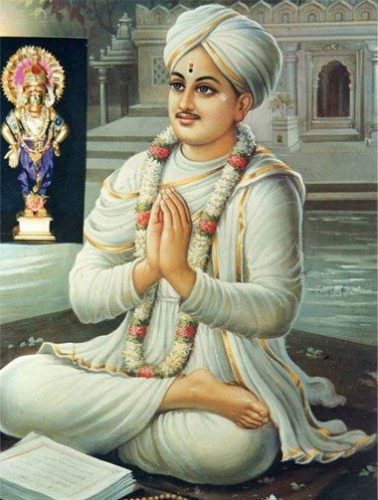 Three hundred years ago, there lived a Saint called Eknath in Maharashtra, India. He used to perform his daily ablutions and rituals at the banks of the river Godavari, every morning. A man, who did not like Saint Eknath, lived in a house on the way to the river. This man would hurl abuses at Saint Eknath as the Saint passed by his house. However, the Saint would not react.

One morning, the man was determined to do something that would irritate the Saint. So when the Saint was on His way back after bathing, the man threw some dirty water on Him. Saint Eknath still did not react and quietly went back to the river, to bathe again.

The man was shocked and furious that the Saint had not reacted. So when Saint Eknath returned, he threw some dirty water on Him again. The Saint went back to bathe in the river, without a comment, again.

The man was expecting some reaction from Saint Eknath, so he was furious and disappointed when he did not get one. He waited for Saint Eknath to return and again threw some dirty water on Him. Again, the Saint calmly went to the river for another bath.

This happened eighteen times - the man would throw dirty water on the Saint and the Saint would calmly go back for a bath. When the man saw Saint Eknath calmly returning from the river for the nineteenth time, he was filled with remorse and shame for what he had done to this great Saint. He fell at Saint Eknath's feet and apologised profusely. Saint Eknath gently helped the man get back to his feet and consoled him. The man then asked Saint Eknath how He could stay calm and ignore such an insult, eighteen times.

Saint Eknath replied, "What insult? Today is a Holy day. I was thankful to you for giving me the opportunity, to purify myself so many times, on this Holy day!" The Saint then left, calmly chanting The Lord's Name.

The man was in awe of the Saint and never troubled Him again.