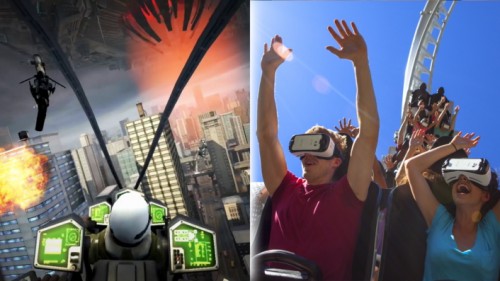 In partnership with Samsung, Six Flags is taking its signature brand of thrills to the next level and beyond in fully immersive, virtual riding experiences using Samsung Gear VR. Some of Six Flags’ most popular coasters will be equipped to allow riders wearing Samsung Gear VR headsets to feel the heart-pumping adrenaline of steep drops, inverted loops and powerful twists and turns as gyros, accelerometers and proximity sensors synchronize all of the action in an incredibly realistic 360-degree virtual reality world.

“This remarkable technology is a definite game-changer for theme park rides and represents everything our brand stands for—delivering the most thrilling and innovative rides and attractions in the world,” said John Duffey, Six Flags President and CEO. “With the addition of these virtual reality coasters, Six Flags will be introducing more than double the number of new coasters and rides than we did in 2015, and more than any year in the last decade. Innovation is part of our DNA, and news in every park every year is driving higher guest satisfaction and building strong momentum for our company.”

“What makes this partnership so compelling for consumers and the broader tech industry alike is that both companies are committed to pushing the boundaries of what’s possible – and bringing a VR coaster to life is certainly a new and thrilling proposition,” said Marc Mathieu, chief marketing officer at Samsung Electronics America. “Now, people can be immersed into a totally new universe while riding a roller coaster, powered by Samsung Gear VR virtual reality devices. This transforms the modern roller coaster into a totally new, one of a kind sensorial experience – powered by technology. We are excited to work with the premiere brand in theme parks to bring Samsung’s VR technology to nine Six Flags locations across the U.S.”