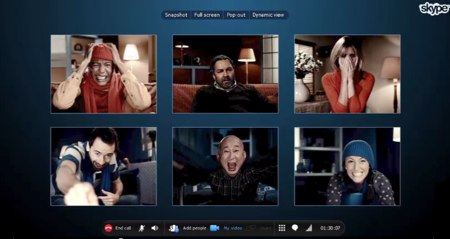 Microsoft will soon add group video calling feature to its Skype mobile app for Android, iOS and Windows 10. The feature is said to be released in the coming weeks. Users who wish to try out the feature before its official roll out can pre-register on Microsoft’s site. In addition, the company is also celebrating Skype’s 10th anniversary and shares details on how the product has evolved through the years.

The Skype Blog states “Please join us as we celebrate ten years of Skype video calling! You are the reason Skype is the video calling app of choice for consumers around the world. You encouraged your friends, family and colleagues to give Skype a try and have changed the way you communicate, generating nearly 2 trillion minutes of free Skype video calls over the last decade, from every corner of the earth.”.

Ten years ago, NASA’s Stardust mission successfully brought back interstellar dust from a comet and the cloud existed only in the sky. That same year, Skype launched a new innovation – free video calling. Yes, it really has been a decade since Skype changed the way people connect with their loved ones. 6 years ago, we innovated again with one-to-one video calling on mobile phones. Today, we are excited to announce the next evolution – group video calling on Android, iPhone, iPad and Windows 10 Mobile.

Two trillion video minutes sounds like a lot – and it is. In fact, with that amount of time, you can use Skype to read to every child in the world for 10 hours, every family can be together over Skype for more than 7 hours and there’s still time left for the entire world’s workforce to have an hour-long interview via Skype.