Thai Night at the Grand Hyatt, Hong Kong, on the evening of the 20th March, 2019. Organized by The Department of International Trade Promotion (DITP), Ministry of Commerce, Royal Thai Government 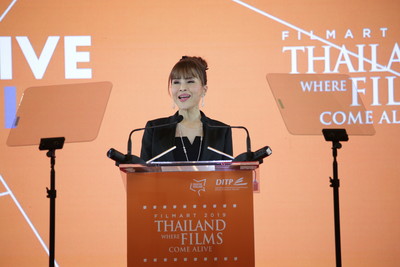 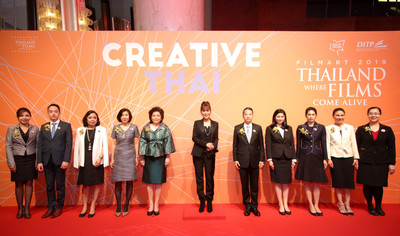 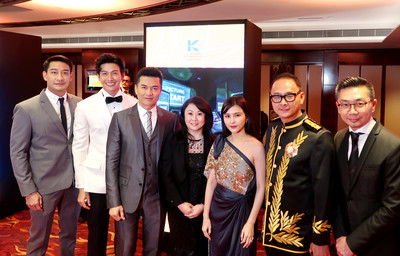 The highlight of the evening was the official opening by Her Royal Highness Princess Ubolratana Rajakanya Sirivadhana Barnavadi.
In a speech recognizing the achievements of the many creative talents working within Thailand's film, television and animation industries, Her Royal Highness said,
"I am particularly proud to stand here before you to share Thailand's accomplishments with the world. Just like the international market has grown so much, so has the Thai film industry, and the driving force behind our astonishing progress is Thai creativity."
Mr. Boonyarit Kalayanamit, Permanent Secretary, Ministry of Commerce highlighted the support by the Department of International Trade Promotion for the film, television and animation industries, not only at FILMART, but at a number of international markets throughout the year, including the American Film Market and the Cannes Marché du Film.
He recognized the value of the entertainment industry to the economy. In 2017, the combined revenue from film, television and animation was almost three billion US dollars. And in 2018, over 98 million US dollars was generated from international production services alone. Also present at the event were representatives of the twenty-two leading Thai companies attending FILMART, and 509 invited international guests.
Hong Kong A lister, Ray Lui Leung-wai attended along with Dr Ally Liu, Senior VP of CP Group HK, H.E. Tun Sri Brandon Toh, Partner of P+ Capital and Sir Eldee Tang, CEO & of Noble Vici Group, Inc.
A number of Thai stars also flew to Hong Kong to join Thai Night, including: Ananda Everingham, ('Shutter', 'Khun Pan') Thanachai Uttchin ('Pod Moderndog'), lead singer of hit band 'Moderndog' Pong Nawat Kulrattanarak, ('Second Sight 3d'), star of many popular Thai television dramas. Puttichai Kasetsin ('DJ Push'), television actor and winner of the 'Most Charming Guy' award.
Thai Night also offered guests the chance to enjoy some signature Thai culinary dishes specially selected to represent the diversity of popular Thai recipes. A performance entitled 'Three Seasons' blended contemporary style with traditional mythology, performed by winners of a youth contest, which was part of a project initiated by Her Royal Highness Princess Ubolratana Rajakanya Sirivadhana Barnavadi, to promote the prevention and solutions to solving drug addiction problems called 'To Be Number One'.
In addition to the legendary Thai hospitality, delectable Thai food, and great performances, seventeen representatives of Thai companies were also present to update the guests with news of their latest achievements.
Thai Night was presented as part of the program by the Department of International Trade Promotion to support and promote Thailand's film and television industry in international markets. Twenty-two Thai companies are represented at a dedicated Thailand Pavilion at the Hong Kong FILMART. These include eight production and post-production services and facility companies, seven film production and distribution companies, four television production and licensing companies and three documentary production companies.
Thailand Pavilion brings Thai companies and government representative booths together in a single, co-ordinated and branded exhibition space at FILMART in Hall 1B, between rows A and B.