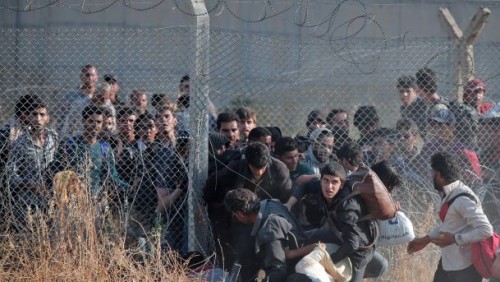 Thousands of Syrians rushed to the Turkish border Friday fleeing a fierce government offensive and intense Russian airstrikes near the largest city of Syria, Aleppo.

Turkey, an ally of the Syrian opposition, promised humanitarian aid for displaced civilians, including food and shelter, but he did not say whether it would let them cross into the country, already burdened by hundreds of thousands of refugees.

"The attacks and bombings by the Russian planes and the Syrian regime have left our brothers with nowhere else to go,'' Turkish Prime Minister Ahmed Davutoglu said in a televised speech.

The UN estimates that nearly 40,000 newly displaced have spent recent days in several border areas of northern Syria, including about 20,000 near the border post of Bab al-Salam. Turkish authorities have increased security at the crossing and pro-government A Haber news channel said all police and military leaves have been canceled.

The international aid group Mercy Corps said that among those who fled to Turkey were residents held areas of Aleppo rebels who feared they would soon besieged by government forces, while ' others fled advancing troops in rural areas.

The Syrian government offensive began earlier this week in north rural areas of Aleppo, the provincial capital, and seems destined to eventually encircling the city. Forces loyal to President Bashar al-Assad captured several towns and villages, driving a wedge into the areas held by the rebels and cutting off a supply route in Turkey.