SINGAPORE / SHANGHAI, CHINA - Media
OutReach - 7 November 2018 - UNPay and the President of Lithuania, Dalia Grybauskait?, had a
fruitful discussion yesterday on the future of financial technology (fintech) at
The China-Lithuania Economic Cooperation Forum
and the China-Lithuania Financial Science and Technology Cooperation. 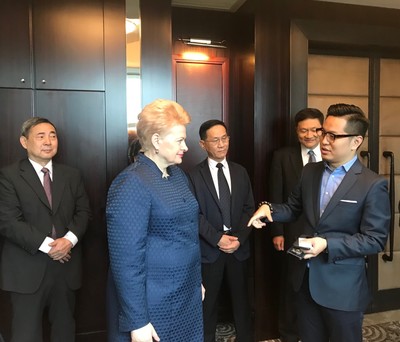 The forum?which was jointly
organised by the Embassy of the Republic of Lithuania and the International
Cooperation Society of the Ministry of Commerce, marked the start of the first
day of enterprise cooperation, at the inaugural China International Import Expo
(CIIE). The CIIE which was opened by Chinese
President Xi Jinping on Monday, aims to bring together more than 3,000 foreign
companies from 130 countries, linking them up with potential buyers from China.

UNPAY founder and CEO
Zhang Zhenghua, was invited as a representative from one of the world's leading
fintech companies. He was cordially received by Lithuania President, Dalia
Grybauskaite, board member of Lithuanian Bank (Central Bank) Mariyo S.
Jergilas, and general manager of a Lithuanian company, Diana Clebona. The party
then continued to have in-depth exchanges on the development of fintech collaborations
between China and Lithuania.

During the meeting with
President Grybauskaite on the first day of CIIE, President Xi pointed out that Lithuania
is an important country in the Baltic region and a vital partner of China in
Central and Eastern Europe. President Xi also stressed that with China's
emphasis on the development of neutral relations, Lithuania, which has obvious
regional advantages, can play an important role in Asia-Europe interconnections.

President Xi mentioned
that China is dedicated to strengthening the strategy and cooperation of the
Belt and Road initiative (BRI), especially in the construction of the railway systems between
Central Asia and European countries, the "Three Ports", as well as expand two-way investments in e-commerce, financial
technology, new energy and agriculture. President Grybauskaite reaffirmed Lithuania's
commitment to economic and trade cooperation with China by personally leading a
delegation to participate in the CIIE, and was the first to meet with President
Xi.

Marius Jugilis, a board
member of the Bank of Lithuania (Central Bank), expressed Lithuania's ambition
to become a "financial technology centre" in the Nordic-Baltic region. This
means that Lithuania will become the gateway for China and the world's
enterprises to enter Europe.

During the round-table discussion,
Zhenghua, Marius Jugillis and a few leaders of well-known enterprises like Yixin
Group, participated in deep discussions on the development of financial science
and technology in the two countries. Zhenghua said that looking at the current international
market, Lithuania is deemed to be a high potential fintech stock that has been
overlooked, in terms of regulatory support, corporate tax rate or talent
reserve.

In his recommendations
to help Lithuania develop its fintech and attract quality enterprises, Zhenghua
highlighted that UNPay would not only provide payment services to the Lithuanian
government, empower the local enterprises, share resources of other countries
on its network, it would also share its proprietary technology and experience with
the country.

"We rely on
China's leading cumulative experience and implementation of financial
technology in payment. As one of the first few fintech companies to start
operations in Europe, we are honoured to participate in the development of fintech
in Lithuania, and to build it up as the cross-border, fintech capital of Europe
and beyond. At the same time, we hope to establish an extensive, cross-border
financial data centre, leveraging on AI, big data and other technologies",
Zhenghua expressed.

"Once this cross-border
financial data centre has been established, international transfers and
exchanges from Europe will commence. The flow of capital trade will change, and
this is the opportunity for the future of fintech between China and Lithuania,"
Zhenghua added.