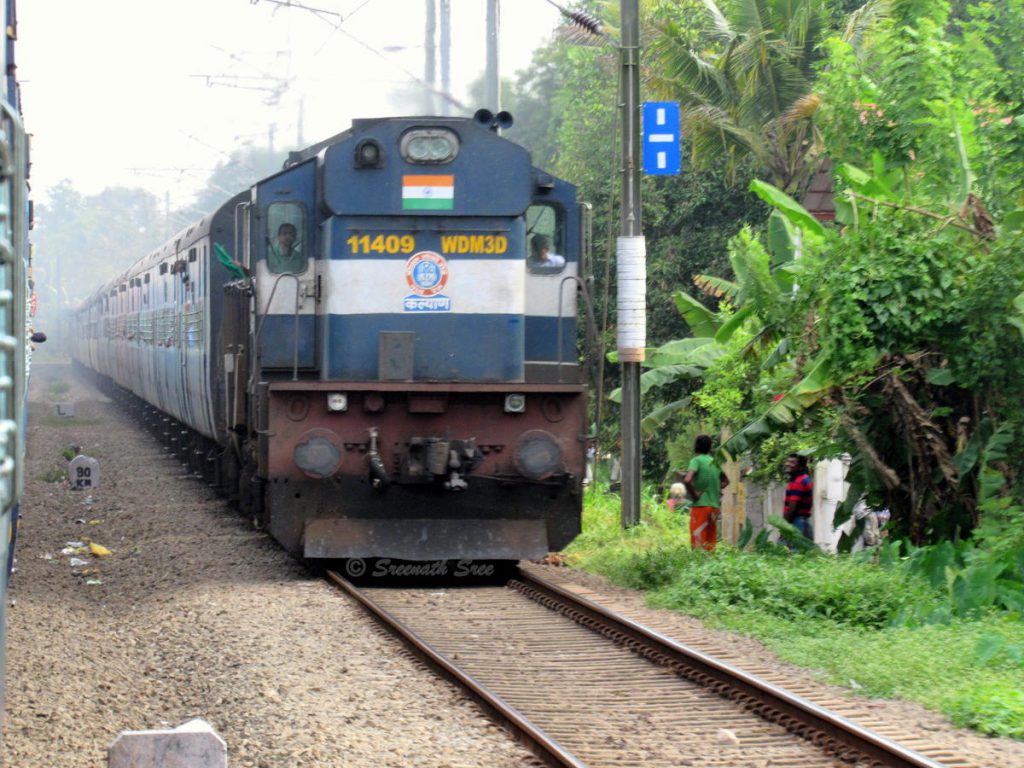 A few years back, Ustad Bismillah Khan was traveling by train from Jamdshedpur to Varanasy . It was a coal run passenger train and Ustad was traveling in the third class compartment . From an intermediate rural railway station , a young cowherd boy boarded the bogey in which Ustad was sitting . He was a dark and lean boy ; and he was holding a flute in his hands . Slowly the boy started playing his flute . The supreme quality of his music surprised the maestro Ustad who didn't even know the 'Raga' the boy was playing . Ustad Bismillah Khan immediately recognized that , the boy is none other than Sri Krishna , the Supreme God Himself . The nectarin Nada-Brahman (Brahman in the form of music) flowing out of Krishna's flute filled Ustad's heart with ecstasy ; and tears of joy started poring out of his eyes .

After the stunning performance , Ustad called the boy near and presented him with a coin requesting him to play the song again . Krishna obliged . This repeated again an again until Bismiillah Khan's wallet became empty . Young Krishna got down at the next railway station and disappeared .

In fact , Ustad was en route to participate in a music concert related to Kumbha mela ( a Hindu religious gathering of millions of devotees ) . In that concert , Ustad presented the newl 'Raga' ( which he learned that day from Krishna ) . This melodious 'raga' was greatly appreciated by the audience who begged Ustad to sing it many times . The music scholars around couldn't make out the name of the 'Raga' and they asked about it to Bismillah Khan . Ustad replied that the name of the Raga is 'Kanhaira' .

Next day's news papers contained headlines about the melodious new 'Raga' invented by Ustad Bismillah Khan . Having read it , Hariprasas Chaurasya, the legendary Musician (Flutist), asked about 'Kanharira Raga's' details to Bismillah Khan . Ustad revealed the truth and sang Kanharira ; and Hariprakash Chaurasya , the topmost Flutist in the word, burst into tears of joy .
'Kanharira' is a divine gem in Indian music, as it originated from the lotus lips of Sri.Krishna , the God of Gods !!!.

The following incident was revealed by Ustad Bismillah Khan to the editor of Illustrated Weekly of India .

Bismillah Khan was born in a family of musicians . His ancestors were court musicians in the princely states of Bhojpur, now in Bihar state. His father was a shehnai player in the court of Maharaja Keshav Prasad Singh of Dumraon Estate now in Bihar .

Bismillah detested studies, so he played marbles on the streets of Benaras. He spent most of his time in the corridor of the house where he could hear his uncles playing the shehnai. Sometimes he even played marbles to the shehnai's tunes.

Bismilla Khan's uncle Ali Bux used to go to the nearby Jadau Sri Balaji (Maha-Vishnu) temple every morning . There, he played the shehnai for the entire day to earn four rupees a month . Sometimes Bismillah followed him in the morning, listen to his music, get engrossed and bewildered. After the mornings sessions at the Jadau temple, uncle and nephew walked towards the Balaji temple. A room was reserved for Ali Bux. He practiced there for about five hours daily. When Ali Bux finished practicing he found Bismillah sitting beside him, listening to him and hungry as well. Never did Bismillah disturb his uncle. They returned home each day after these morning sessions for lunch.

Bismillah often wondered why his Uncle went to the room in the Balaji temple to practice while he could practice at home without being disturbed. Unable to suppress his curiosity he asked his uncle one day. Uncle Ali stroked his locks and answered, "You will learn it one day." Bismillah was quick to ask, "But, Mamu when will I start playing shehnai ?" "Why talk about when; you are going to start today," he said.

That evening uncle Ali took Bismillah to the Jadau Maha-Vishnu temple, and after the evening shehnai recital to the room in the Balaji temple where he had practiced for over 18 years. Finally, uncle Ali granted Bismillah Khan the permission to practice there . However Uncle Ali came with a note of caution "In this temple , if you happen to experience or see anything extraordinary, don't say to any one " .

Overjoyed, Bismillah practised in the room for 4 to 6 hours. Oblivious to the changes taking place outside the four walls he experimented and discovered new heights and depths of musical scales and melodies. Bismillah was overtaken by the thirst to perfect his music.

One day Bismillah khan was engrossed in his shahanai practice at 4:00a.m in the premises of Balaji temple, all alone. Suddenly he realised that some one was sitting next to him. It was none other than Bhagavan Balaji Himself !!!.

Shocked and astonished, Bismillah Khan remained still . Then Sri . Balaji smiled and
said "Play.."... . But Khan was still too shocked to continue. Then Bhagavan
Balaji smiled and disappeared.

Later that day Bismillah Khan went to Ali who is his Guru and Uncle, narrated to him what he has experienced in Balaji temple . Uncle slapped him on the cheek and "Did I not tell you not to say any thing to any one" ...?If any one watched the Video about Ustad Bismillah Khan on Doordarshan some 10 years ago, you would have heard him refer to it again.

Mysterious are the ways of Bhagavan Narayana when it comes to blessing His devotees. "VICHITHRA-ROOPASTHWAT-KHALU-ANUGRAHAH." (Dasakam 87, Sloka 7-- Narayaneeyam) . Bhagavan doesn't go by caste, creed or religion. "BHAKTI" is the only criterion. All Glories to Bhagavan Sri Krishna ! .