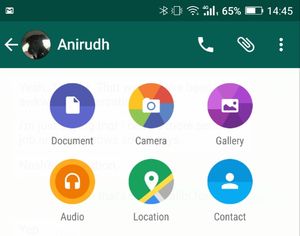 Just days after a big update by Wahtsapp for iOS, which added the pinch to zoom for videos and sharing from third-party apps, now WhatsApp comes with a Documents sharing feature for Wahtsapp on Android and iOS. Now get the latest Whatsapp versions from their respective app stores. The new server side update will now allow users to share locally stored documents with individuals as well as groups.

On Android, the same appears upon clicking the attach icon where there is now a ‘Document’ icon instead of a ‘Video’ one. Tapping on the same will show you all the locally stored documents on your device, where you can select and send the same. You can share the documents individual to a user or a group.

This is a much awaited important feature which will be very useful for all Whatsapp users. Most of the other Whatsapp competitors already have this feature.

On iOS, tapping on the ‘Upload’ icon will now show a ‘Share Document’ option among others that will allow you to share documents from other third-party apps (mainly online storage) which is similar to what was revealed in the last update for photo and video sharing.

As per the reports as of now you can share only PDF files,Now Word and Excel files. Hope Whatsapp will soon add this feature to more document formats.