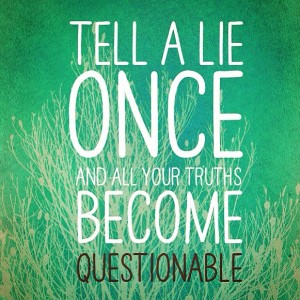 Mark Twain once said, “If you tell the truth, you don’t have to remember anything.”Lying is not as simple as telling the truth versus falsifying it. It is deeper than that. It is not always about distortion or non disclosure of facts, it may well be about creating a whole new set of truths that only the liar knows of.Everybody lies, but few understand what lying is, what it does, and how to stop it.

Lying is saying something with the intent of creating a false belief or impression. It’s an attempt to get someone to believe something that is not true.

Why do People Lie?

Julie asked, Why does the world lie? This is a great question”with many answers.

How to detect whether we are being misled?

How, then, can we best detect whether we are being misled? There is no foolproof way, but there are often clues you can see in behavior that should make you suspicious:

Avoidance of eye contact: Usually someone makes eye contact at least half the time they are talking to you. If you notice them avoiding eye contact or looking down during a specific part of a conversation, they may well be lying.

Change of voice: A variation in pitch of voice or rate of speech can be a sign of lying. So can lots of umms and ahhs.

Body language. Turning your body away, covering your face or mouth, a lot of fidgeting of hands or legs can indicate deception.

Contradicting yourself:. Making statements that just don’t hold together should make you suspicious.

If you lie all the time, even about unimportant things, you are likely to have a problem that will eventually -- if it hasn’t already -- cause you real relationship, financial or legal troubles. Figuring out what is driving you to lie in the first place will help heal this self-destructive behavior. This may mean going into treatment with a therapist to discover why you feel the need to deceive.

Lying as a Symptom of a Disorder

According to Psychology Today, people with psychiatric disorders lie for a variety of reasons.

Treatment success depends on how willing the sufferer is to seek help. Taking medication can be easy, but psychotherapy takes work. The person must be an active participant and follow through with the entire treatment plan. The problem with compulsive liars is that they have a difficult time telling the truth in therapy, and this can be detrimental to reaching treatment plan goals. Experienced therapists are able to tell when people are not telling the truth, and they are able to help them realize what they have been doing and how it has affected their life.