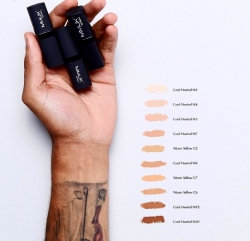 Auckland, New Zealand, December 22, 2018 --(PR.com)-- In a world where millions of men are trying every trick and treatment in the book to put their best face forward, there’s one beauty trend that looks certain to stick around - makeup for men. The men’s grooming market has come a long way in the past twenty years, rising from a virtual non-entity to a multi-billion dollar industry. There has also been a sharp rise in acceptance towards the modern man engaging in a heavily involved daily grooming routine.

According to a recent study carried out by GQ Magazine and Clinique For Men, an eye-watering 53% of men’s grooming connoisseurs, between the ages of 16 and 24 have added a new product to their regime in the past six months.

Orders to MMUK Man from men in New Zealand and Australia have risen by 38% and 29% respectively in 2018, compared to the previous year. With men now spending $106 on average for their opening orders, compared to just $83 for the previous 12 months, it shows a growing trend of confidence and intrigue, not just towards the brand, but towards this buzzing segment of the male grooming market.

With regular direct clients of MMUK MAN in New Zealand shelling out over $40 (up by 18% compared to 2017) each month on products like concealer, tinted moisturiser, foundation and beard filler, this growing popular trend shows no signs of losing momentum.