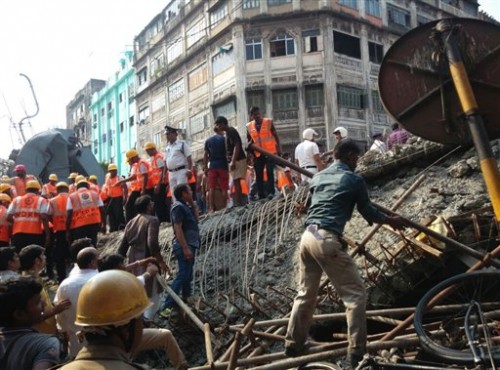 In a shocking incident today, a Under-construction flyover collapses in Kolkata, many feared dead.
Kolkata Police confirms 14 dead and 78 injured in the collapsed under-construction bridge near Ganesh Talkies. This flyover was the object of some controversy, with lots of residents complaining about it, particularly due to the congestion it caused. "There was a loud explosion accompanied by a crashing sound", said a eyewitness

This Flyover was called "Vivekananda flyover"

The total project cost for this flyover was 164-crore.

Project was initiated by the Left Front government in 2007 and was nearing completion.

This flyover proposed for the movement of traffic as well as pedestrians in this busy and clogged stretch of the central business district in Burrabazar-Posta.

Right from the start of construction local people were objecting for the the flyover design in some stretches of the flyover crossed menacingly close to multi-storied buildings.

Local had already raised their voice regarding the safety of the flyover.

As per the state government sources: State Urban Development Department was putting pressure to ensure speedy completion of the project.

There were many issues on land clearance to be given by the Kolkata Port Trust to the state government on the Howrah end of the flyover. Chief Minister Mamata Banerjee intervention had cleared all the issues and the completion work was in progress.