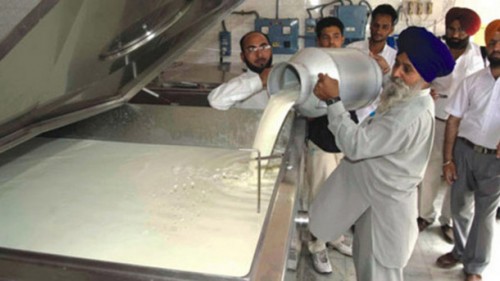 India Recording A Growth of 6.26 % whereas World Milk Production Increases by 3.1 %

Production of Fish During the Last Quarters of 2015-16 has also shown an Increasing Trend and is Estimated at 4.79 MT

The Economic Survey 2015-16 presented today in the Parliament by the Union Finance Minister Shri Arun Jaitley emphasizes that the Indian agricultural system is predominantly a mixed crop-livestock farming system, with the livestock segment supplementing farm incomes by providing employment, draught animals and manure. India ranks first in milk production, accounting for 18.5 per cent of world production, achieving an annual output of 146.3 million tones during 2014-15 as compared to 137.69 million tonnes during 2013-14 recording a growth of 6.26 per cent. Whereas, the Food and Agriculture Organization (FAO) has reported a 3.1 per cent increase in world milk production from 765 million tones in 2013 to 789 million tones in 2014.

The per capita availability of milk in India has increased from 176 grams per day in 1990-91 to 322 grams per day by 2014-15. It is more than the world average of 294 grams per day during 2013. This represents a sustained growth in availability of milk and milk products for the growing population Dairying has become an important secondary source of income for millions of rural households engaged in agriculture. The success of the dairy industry has resulted from the integrated co-operative system of milk collection, transportation, processing and distribution, conversion of the same to milk powder and products, to minimize seasonal impact on suppliers and buyers, retail distribution of milk and milk products, sharing of profits with the farmer, which are ploughed back to enhance productivity and needs to be emulated by other farm produce/producers.

In the poultry segment, the Government’s focus, besides framing suitable policies for enhancing commercial poultry production, is for strengthening the family poultry system, which addresses livelihood issues. Both egg and fish production has also registered an increasing trend over the years. Egg production was around 78.48 billion eggs in 2014-15, while poultry meat production was estimated at 3.04 MT. Fisheries constitute about 1 per cent of the GDP of the country and 5.08 per cent of agriculture GDP. The total fish production during 2014-15 was 10.16 MT, an production during the last quarters of 2015-16 has also shown an increasing trend and is estimated at 4.79 MT( Provisional). There is increasing significance of poultry and livestock products in the context of diversifying farm and non-farm activities in the agriculture sector to increase livelihood security.