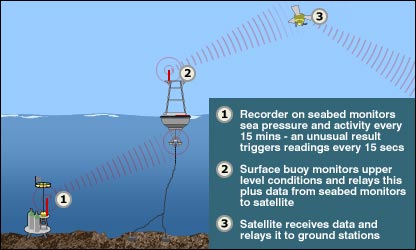 The Indian Tsunami Early Warning Centre (ITEWC), which is based at & operated by Indian National Center for Ocean Information Services (INCOIS), Hyderabad has all necessary infrastructure and capabilities to give tsunami advisories to India as well as to Indian Ocean countries. ITEWC has been designated as one of the Regional Tsunami Service Providers for the entire Indian Ocean Region by the Intergovernmental Oceanographic Commission (IOC) of United Nations Educational, Scientific and Cultural Organization(UNESCO) on 12 October 2011. Since then, ITEWC is providing tsunami warnings and related services to all countries in the Indian Ocean Rim (24 Countries) beyond fully serving the India’s coastline / Islands. The centre is capable of detecting tsunamigenic earthquakes occurring in the Indian Ocean as well as in the Global Oceans within 10 minutes of their occurrence and disseminates the advisories to the concerned authorities within 20 minutes through email, fax, SMS, Global Telecommunication System (GTS) and website.

The ITEWC consists of national and international observational network of seismic stations, sea level gauge stations and tsunami buoys around the Indian and Pacific Oceans. Data from approximately 400 seismometers is being received in real-time and processed automatically to detect an earthquake of magnitude 4.0 and above anywhere on the globe. As soon as the earthquake is detected, warning centre transmits the first bulletin based on seismic data describing the location of earthquake, its magnitude, depth and other characters of the event. After issuing the first bulletin, seismic data are further analysed to improve the accuracy of earthquake parameters (magnitude, depth and location). The processing of seismic data is optimized to detect and characterize large earthquakes within earliest possible time.

A pilot project on Earthquake Early Warning (EEW) system is on implementation for northern India (Uttarakhand) by Indian Institute Of Technology (IIT) Roorkee which is funded by the Ministry of Earth Sciences (MoES). The system is under testing by IIT Roorkee. Such type of system gives a time lead for issue of warning on occurrence of an earthquake, so that some remedial actions regarding vacating building, shutting down critical operations etc may be taken up.